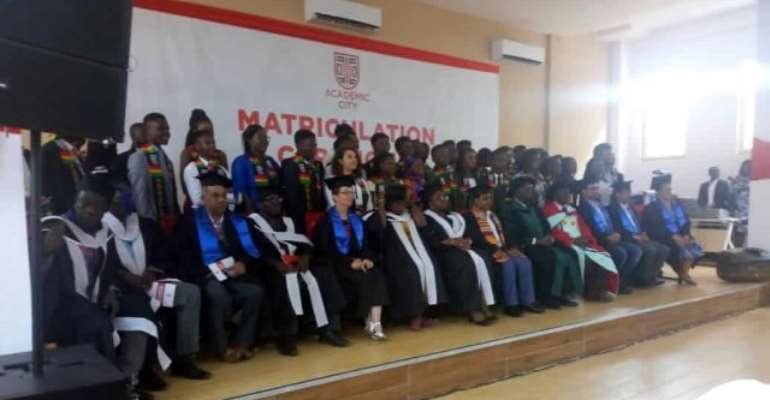 A cross-section of the matriculating students

The President of Academic City College has waded into the ongoing ‘sex for grades’ debate, describing it as an entrenched culture of sexual predation in Ghanaian society that must be extensively investigated.

Professor Fred McBagonluri made the statement in an interview after a matriculation ceremony at the school’s Haatso campus on Friday morning.

“Sexual harassment is entrenched and has existed for years. There is this culture of sexual predation that we need to critically look into,” he urged.

Professor McBagonluri observed that women were not the only victims of this phenomenon but men also fall victim to sexual harassment.

According to him, the pervasiveness of sexual harassment makes it expedient to be probed widely.

“We need to create an environment that is systematic and allows everybody to perform to their fullest creative potential and not in an intimidating environment,” he advised.

The BBC Africa Eye 'Sex for Grades' documentary, which exposed sexual harassment of female students by lecturers in the University of Lagos, Nigeria and the University of Ghana, kick-started a nationwide debate on the matter.

Two senior lecturers of the University of Ghana were captured in the documentary allegedly making love proposals to two undercover female journalists who posed as students.

Prof Ransford Gyampo and Dr Paul Kwame Butakor have since been interdicted as the school investigates the allegations against them.

Professor McBagonluri said in his speech during the matriculation that the matriculants must remain committed, dedicated and ready to acquire knowledge to meet the school's expectations.

A total of 48 students were matriculated on Friday to study in the varied faculties of the tertiary institution.