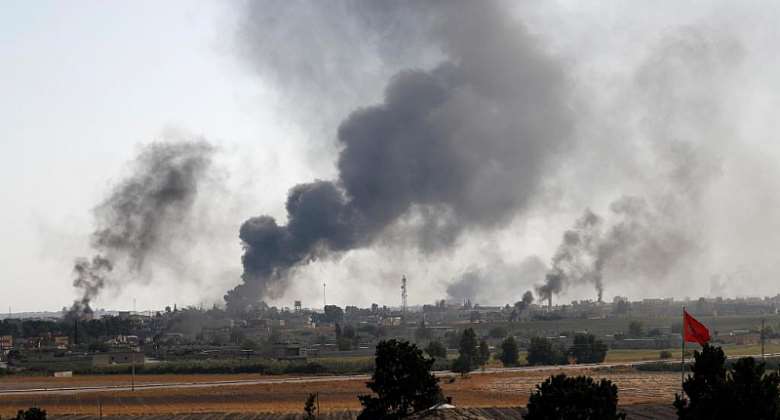 Five detained members of the Islamic State armed group have escaped from a Kurdish-run prison in northeastern Syria after Turkish forces hit the area on day three of its offensive dubbed 'Operation Peace Spring'.

A prison guard at Navkur, located in the northern Syrian town of Qamishli, had told AFP prior to the breakout that the facility housed mostly foreign IS fighters.

After a shelling struck near the prison, the five IS fighters escaped, confirmed an official from the Syrian Democratic Forces.

Despite criticism and warnings against a measured operation into northern Syria, Turkey has pressed on with its operation aimed at stamping out the Kurdish YPG, which it says has links to Kurdish terrorists in Turkey.

As it entered its third day, 17 were reported killed on the Syrian side with seven deaths on the Turkish side.

Earlier this week on Sunday, US President Donald Trump announced the full withdrawal of all American forces in northern Syria that had been working in a coalition with the Syrian Democratic Forces, the SDF, alongside its Kurdish militias, to root out the Islamic State armed group.

The US had about 1000 troops in Syria.
IS prisons
Since the defeat of IS through the coalition forces, thousands of former IS-fighters have been incarcerated across northern Syria in prisons run by the Kurdish-led forces.

Ahead of Washington's withdrawal, France and other countries warned of an IS group resurgence.

“We are going to be extremely careful that this announced disengagement from the United States and a possible offensive by Turkey does not create a dangerous [move] that diverts from the goal we all pursue – the fight against the Islamic State – which is dangerous for the local population,” Minister of Armed Forces Florence Parly told reporters in northern France.

But Turkish forces were quick to mobilize and that in turn has sent thousands of Kurdish soldiers running to the frontlines, thereby abandoning the prisons filled with IS fighters.

On Friday, women affiliated with the extreme Islamist group attacked security offices with sticks and stones during unrest at a camp where they were held by Kurdish-led forces.

In an interview with Defense One, Mazlum Abdi, the SDF Chief, said the departure of US troops would jeopardize all the achievements made with the coalition thus far against IS.

“Honestly, we were surprised by this decision because the security mechanism was ongoing and it was working and we did our best,” said Abdi, in reference to an August 2019 security agreement the U.S. established with Turkey to minimize its concerns about SDF's proximity to its border. “We did everything on our end to help this succeed.”

Displacement
100,000 people have been displaced, said United Nations on Friday, following the assault that began on Wednesday this week.

Kurdish forces warned earlier on Friday they would have to evacuate a camp west of Ras al-Ayn, sheltering more than 7,000 displaced people from other regions of the country.

International reaction
The Netherlands announced on Friday it would withhold all license applications for the export of military goods to Turkey. It comes after Finland and Norway also said they would stop selling arms to Turkey in response to the Turkish operation against in northern Syria.

The Pentagon has urged Turkey to halt its military incursion into Syria, saying it threatens progress in the fight against IS and risks harm to US troops.

President Trump has called the invasion a “bad idea” and offered the possibility of the US mediating between Kurdish forces and Turkey, but Ankara has not warmed up to that idea.

The European Union voiced its anger at Turkey's operation, but diplomats say concrete measures in the form of sanctions are unlikely.

EU leaders have called on Ankara to stop its assault, warning of disastrous humanitarian consequences and the danger of giving new life to IS.

But apart from words, no concrete action has been taken.

Turkish President Reycep Tayyip Erogan issued a threat to the EU saying he would allow millions of refugees to head to Europe if the bloc criticised the offensive.