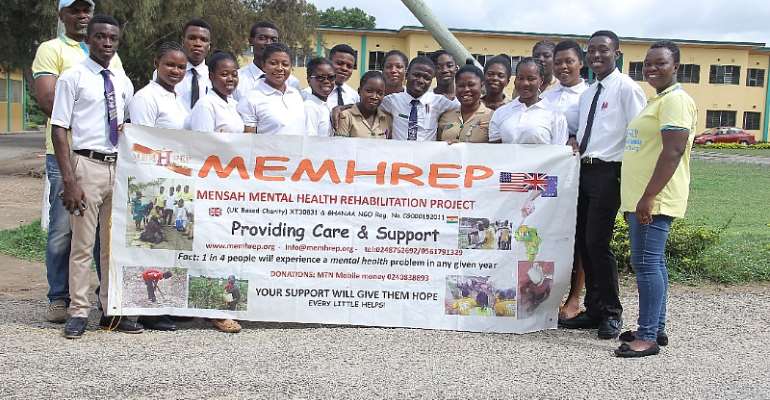 World Mental Health Day was first celebrated on October 10, 1992 at the initiative of Deputy Secretary-General, Richard Hunter. It is celebrated with the objective to mobilize efforts in support of mental health and provides an opportunity for everyone to talk and discuss mental health issues and what more needs to be done. As part of this year’s celebration of world mental health day, Mensah Mental

Health Rehabilitation Project, MEMHREP a UK based non-governmental organization founded by Mr. Adu- Gyamfi, a proud son from the Ashanti Region reached out to millions of students and the general public in Ghana. MEMHREP in collaboration with LUAK foundation and supported by Trauma Specialist Hospital in celebration of World Mental Health Day on the theme “Mental Health Promotion and Suicide Prevention” saw thousands of students from both junior and senior high school in the Effutu municipality at the assembly hall of Winneba Senior High School to be given a speech and know the structures of mental illness sailing through the distress and plight of mental victims.

MEMHREP hopes that in drawing attention to suicide, governments around the world will adopt public health agendas that prioritize addressing the issue, world health organization has reported that nearly 80,000 people die from suicide around the world every year, making it the second leading cause of death among individuals aged 15-29. Suicidal behavior has existed throughout human history, but due to several complex factors, it has increased gradually in all parts of the world and in the past few decades, has reached alarming statistical levels.

Mr. Kelvin Ayisah-Sam, deputy administrator for MEMHREP Ghana in his speech said “Getting people to talk about a subject that turns to be a taboo and about which many hold mistakenly are prejudiced ideas will help the community to learn about the risk factors so that they can identify and learn to address them. He further continued by saying to the students and pupils present that MEMHREP seeks to end the distress and plight of persons living with mental illness as well as promoting mental health. MEMHREP is tasked with gradually alleviating mental health issues the country faces causing a slight abnormality in the standard and beauty of living.

The organization is also responsible for carrying out valid, effective and much needed research that listens to the clients in order to educate the concept and perspective concerning mental health and appraise the achievements and successes as well as also criticize the flaws. MEMHREP does all to be transparent in its operations and dealings and also make it possible for people who experience mental distress to live fully and play their respective roles in the society.

The warning signs of suicide are indicators that a person may be in acute danger and may urgently need help:

ASEPA petitions Presidency for names of members on committee...
29 minutes ago