Rough road ahead for Abiy after Nobel triumph 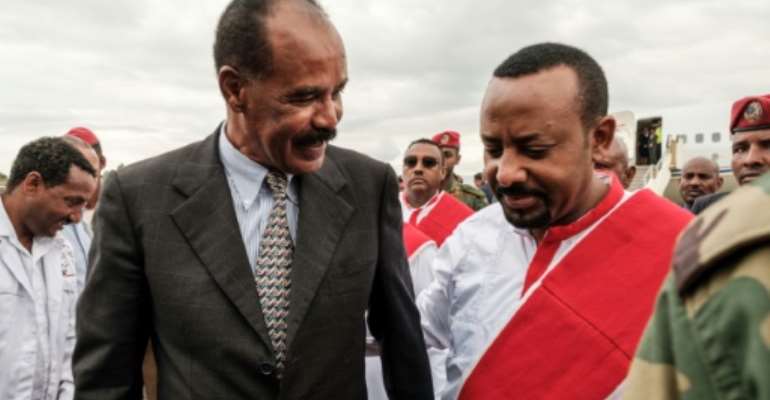 Ethiopian Prime Minister Abiy Ahmed faces stark challenges on the very issues that earned him a Nobel Peace Prize on Friday, and analysts say the coming months may tell whether he can translate this early applause into concrete success.

The Nobel Committee cited Abiy's drive to mend fences across the Horn of Africa while also pursuing dramatic reforms at home -- measures that range from the promotion of democracy to women's rights.

Yet many of those areas remain works in progress, with early headline-grabbing steps yet to be followed by the kind of victories that would seal lasting change.

"But there is a lot of work to do to achieve a new domestic political settlement between fractious actors, and there are also major obstacles to advancing the Eritrea peace process, suggesting that Abiy's hardest challenges lie ahead."

The Eritrea deal is seen as Abiy's signature achievement, but it has been weakened by a lack of tangible progress on critical issues like border demarcation.

Border conflict: The frontier between Ethiopia and Eritrea that was set by an independent international commmission, along with Ethiopian and Eritrean claims around the village of Engal. By Dario INGIUSTO (AFP)

The highly-publicised reopening of the countries' borders was abruptly reversed just a few months later, and there are no signs that will change anytime soon.

Winning the Nobel will undoubtedly give Abiy a prestige that will add to his power of leverage.

Yet whether any of these initiatives, which require gritty long-term solutions, can make headway is an open question.

"Because of the density of external actors currently involved in Sudan, Abiy's ability to shape events going forward is limited," Woldemariam said.

"On the Eritrea issue, where Abiy naturally has more leverage, his reputation as a peace-builder will be legitimately tested in the coming months."

Perhaps more pressing for Abiy is the task of guiding Ethiopia to elections currently planned for next May.

A competitive and credible vote would be perhaps the best possible indication that Ethiopia is breaking with its authoritarian past and that Abiy -- a product of the long-ruling Ethiopian People's Revolutionary Democratic Front (EPRDF) coalition -- is serious about changing direction.

But human rights groups have sounded the alarm in recent months about a spike in arrests of opposition activists and journalists, some of whom are being held under controversial counterterrorism legislation.

The arrests picked up following the assassination of five high-ranking political and military officials in June -- an event that highlighted a fragile security situation marred by ethnic violence and widespread internal displacement.

Amnesty International said Friday that these trends indicate that Abiy's work "is far from done".

"This award should push and motivate him to tackle the outstanding human rights challenges that threaten to reverse the gains made so far," Amnesty said.

Abiy's loosening of the reins has seen years of tensions between the country's diverse ethnic groups boil over -- usually over land and resources -- leading to deadly violence in the country that resulted in the world's largest displacement crisis in 2018.

More domestic turbulence could be on the way.

Ahead of the election, Abiy has been pushing a plan to transform the EPRDF into a political party, a move that risks fracturing alliances that have held for nearly three decades.

The Nobel committee also praised Abiy's efforts to promote women's rights in Ethiopia, though some activists say those reforms have not been as transformative as they first appeared.

Abiy "wowed everyone" by overseeing the appointment of a gender-equal cabinet and the country's first woman president, but structural challenges that would address problems like gender-based violence have been lacking, said Sehin Teferra, head of the Ethiopian feminist group Setaweet.

"It's been really worrying how much the gender agenda has kind of been stalled or paused since then," Sehin said.

These challenges aside, Abiy has remained publicly committed to his expansive agenda, shrugging off criticism that he is taking on too much too fast.

On the night before the Nobel was announced, he hosted a 500-person banquet inaugurating the new "Unity Park" in Addis Ababa.

The project, which involved converting a palace that once housed Ethiopia's emperors into a museum, is intended to rally Ethiopia's many ethnic groups behind common national goals of peace and prosperity.

After the prize was announced Friday, his office stressed this same goal in a statement.

"This victory and recognition is a collective win for Ethiopians, and a call to strengthen our resolve in making Ethiopia -- the New Horizon of Hope -- a prosperous nation for all."

FixingTheCountry Movement to march in support of Akufo-Addo'...
29 minutes ago