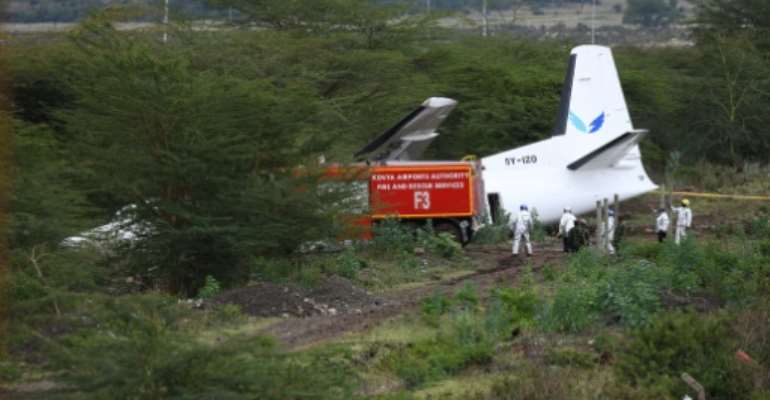 Kenyan Airports Authority firefighters respond to a Silverstone Air aircraft, with 50 passengers and 5 crew members on board, that overran the runway on takeoff at Wilson Airport, in Nairobi. By SIMON MAINA (AFP)

An aircraft flying 55 people from Kenya's capital to tourist attraction Lamu island veered off the runway during takeoff, skidding into some trees and leaving nine injured, aviation officials said Friday.

The plane, operated by domestic airline Silverstone Air, was to make a stop at port city Mombasa before heading to Lamu, home to a UNESCO world heritage site off Kenya's northern coast.

"This morning at around 9:00 am, a Fokker 50 aircraft... veered off the runway while departing from Wilson Airport, Nairobi. The aircraft had 55 souls on board, 50 passengers, 5 crew," the Kenya Airports Authority (KAA) said in a statement.

An AFP photographer on the scene at Wilson Airport saw emergency services surrounding the plane, which went through the fence and ploughed on several dozen metres (yards) into the brush.

Silverstone Air, a company specialised in domestic flights, confirmed in a statement that its Fokker 50 plane had had an accident at Wilson Airport.

Sheila Muturi, a company official, later told a press conference that nine people were injured and that an investigation was under way to establish the cause of the accident.

"We can now confirm that there were nine passengers who sustained injuries and are all receiving treatment," she said.

Wilson Airport is a small facility south of Nairobi, mostly handling domestic flights to the coast and national parks. It is located about 15 kilometres (nine miles) from Jomo Kenyatta International Airport, the largest in Kenya.