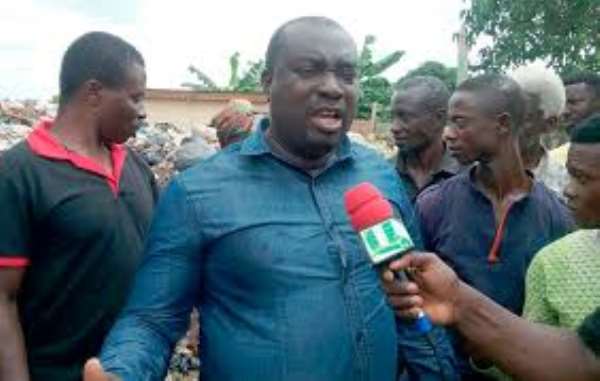 A youth group in Manso Nkwanta who call themselves Concerned Youth of Manso have expressed their disgust at the their Member of Parliament Mr. Joseph Albert Quarm for what they describe as irresponsible leadership.

According to the aggrieved youth their MP who is popularly known as Prof. Quarm could not show enough commitment to their well being and survival when the president paid a working visit to their area on Wednesday.

Spokesperson for the group Kwaku Ratty in an interview with this journalist noted that Manso is well known to be a mining area and that has been the source of livelihood for the youth and their dependents.

All their joy upon hearing of the president's visit he noted, was because they thought their MP could lobby the president to the Community Mining site for him to have first hand information about the site but he deliberately ignored it.

“If there is anything very needful to the youth of Manso, it is for us to go back into mining, and we want to do it the proper way, but the MP has hugely disappointed us”. Mr. Ratty told this reporter angrily.

The youth some of whom were seen grumbling and openly showing their disgust at their MP on the day, have vowed to repay him appropriately at the right time.

“We sent him to parliament to fight our course but we have realized he does not care about our well being so we know what to do when the time comes”. He noted angrily.

According to Mr. Ratty, the Paramount chief of Manso Nkwanta, Nana Bi Kusi Appiah did his best during his speech to let the president know that the reopening of the community mining center is a collective need for all residents and they needed their MP to 'hammer it well and try to let the president visit the site, but he failed.

“Indeed, we the Concerned Youth of Manso apportion the blame on our MP, Mr. Joseph Albert Quarm who doubles as Board Member for the Minerals Commission for not playing a pivotal role in making sure the president visit the community mining project site at Manso Atwere which is directly opposite Mansoman Senior High School to acquaint himself with preparations being put up by an individual to support the youth in Manso”, He said.