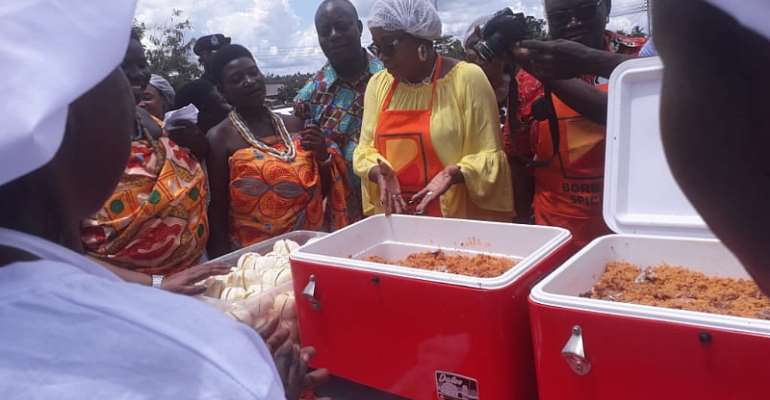 The Ministry of Gender, Children and Social Protection in collaboration with the National Secretariat of the Ghana School Feeding Programme (GSFP) have intensified efforts at promoting the consumption of nutritious ‘Gari fotor’ fortified with vegetables and soybean for pupils under the programme.

As a result, the Minister, Cynthia Mamle Morrison and officials of GSFP have organized a two day innovative nutrition programme for the school feeding caterers at Bobikuma and Kwaman communities in the Agona West Municipality in the Central Region.

The essence of the innovative nutrition programme, according to the minister is to sensitize and introduce the eating of nutritious "Gari fotor" fortified with locally produced Ghanaian vegetables and soybeans into the school feeding menu.

Speaking at separate durbars of Chiefs and people of Bobikuma and Kwaman after practical cooking demonstration sessions in the communities, Cynthia Mamle Morrison was grateful that schools in the Lower and Upper Bobikuma had also benefited from the programme.

According to her, the Ghana School Feeding Programme had tremendously increased enrollment in schools in the area, reduced the financial burden on most parents, created jobs for many women and reduced poverty among local farmers who supply caterers with foodstuffs and vegetables.

As the Member of Parliament for Agona West Constituency, she entreated parents to send their children to school in order to become more useful citizens in the society since they represent the future of the nation.

She charged parents to take responsibility for the upbringing of their children to prevent them from going wayward.

Mrs. Morrison who advised teachers to properly guide and monitor the progress of pupils, stated that, the introduction of the school feeding programme was meant to boost local production of crops by farmers in the various communities thereby earning them an income.

The Acting National Coordinator of the Ghana School Feeding Programme, Mrs. Gertrude Quashigah said she was energized and inspired by the presence of the Minister to demonstrate new cooking skills to the caterers.

She said one of the core objectives of the GSFP Nutrition and innovative training is to impact on caterers some new ways of cooking local dishes to derive more nutritional content for the health and well-being of school children.

“Gari can be fortified with soy powder and used to prepare “Nutritious Eba” which is high in protein and carbohydrates. This can be served with kontonmire stew or soup with green leafy vegetables which are high in iron which is needed for good growth and development in children.