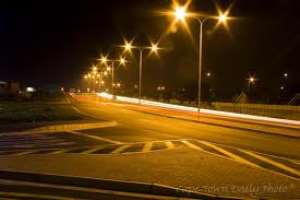 Malfunctioned street lights, traffic lights as well as numerous potholes in Koforidua, the Eastern Regional capital has been repaired ahead of the President’s visit to the region.

Koforidua, has suffered from effects of malfunctioned streetlights over time with some traffic lights also not working posing danger to the lives of road users.

Also, potholes had taken over most of the town roads within the city making it difficult for easy access by vehicles plying the area but it seems they are now being fixed.

Several complaints by residents seem to have yielded no response until this week as the region prepares to meet the first gentleman of the country.

In a random interview with some residents in the Regional capital, most people were of the view; government appointees in the municipality have not been fair to them as their numerous pleas were not adhered to, despite being citizens of the country.

“So our leaders want to tell us that until the President is coming to the region, we the citizens would not access to street lights and good roads” some residents queried.

President Akufo-Addo is expected to visit about six districts across the region to ascertain progress of work of government projects as well as interact with the people and students.

The Regional Communications Director for the ruling New Patriotic Party (NPP), Mr. David Prah, in an interview earlier interview with the reporter, revealed that President Akufo-Addo will start his tour from Nkawkaw by inspecting the 5km Akwasiho-Twerenoase road currently under construction.

He added, the President shall then proceed to inspect the construction of the 10km Nkawkaw town roads, after which he will move to the Atiwa West District.

According to Mr. Prah, the President and his entourage will visit the Fanteakwa North District where there will be an inspection on the Osiem-Begoro 24.8km road which has been neglected over the years.

On Monday, 14th October 2019, President Akufo-Addo will meet with Heads of security agencies within the region for a closed-door meeting and later take to the principal streets of Koforidua.

Mr. Prah stated, the President will end his three-day tour at the Koforidua Sec/Tech, where he will interact with both teachers and students who are currently enjoying the Free Senior High School policy.