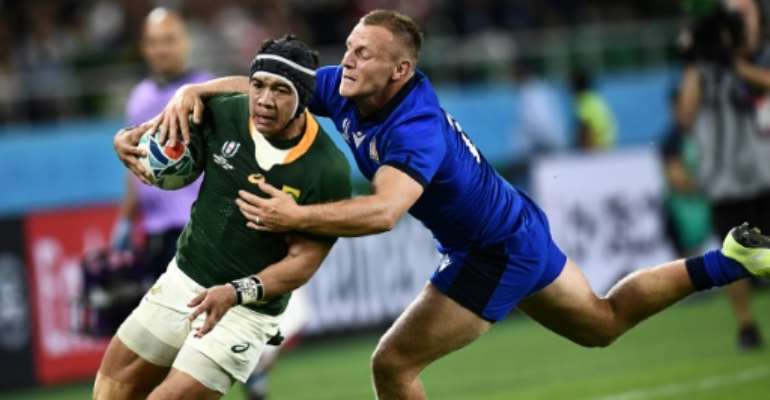 Cheslin Kolbe suffered the injury late on against Italy. By Anne-Christine POUJOULAT (AFP/File)

South Africa speedster Cheslin Kolbe has an "80 to 90 percent" chance of being fit for next week's Rugby World Cup quarter-finals as he races to shake off an ankle injury, coach Rassie Erasmus said on Friday.

Erasmus said Kolbe may be able to resume full training by Monday after he twisted his ankle and limped off in South Africa's 49-3 win over Italy a week ago.

"Cheslin has that ankle injury that he picked up against Italy, which meant he wasn't available for the last game," Erasmus said.

"He is still nursing that but we are hopeful that he will be training fully on Monday.

South Africa finished second behind New Zealand in Pool B, meaning their quarter-final will be against the winners of Pool A: either Japan, Ireland or Scotland.

Erasmus said he was a "little bit nervous" about second-choice scrum-half Herschel Jantjies, who suffered a hamstring strain in Tuesday's win over Canada.

"We only have three scrum-halves here so we want to make sure that he rather has more recovery time. So, hopefully on Monday he is also ready to go," Erasmus said.

"Herschel won't go home -- it's definitely not that bad an injury. It's not even a grade one (strain)," he added.

Flanker Francois Louw, 34, also has a "few bumps and bruises" including a swollen knee, Erasmus said.

"One knee is swollen a little bit -- he's at that age where after every game, he takes a little bit longer," he said.

"He'll be fine -- we are just managing him a little bit differently to the other guys at this stage."