Political outsiders to square off in Tunisia presidential runoff 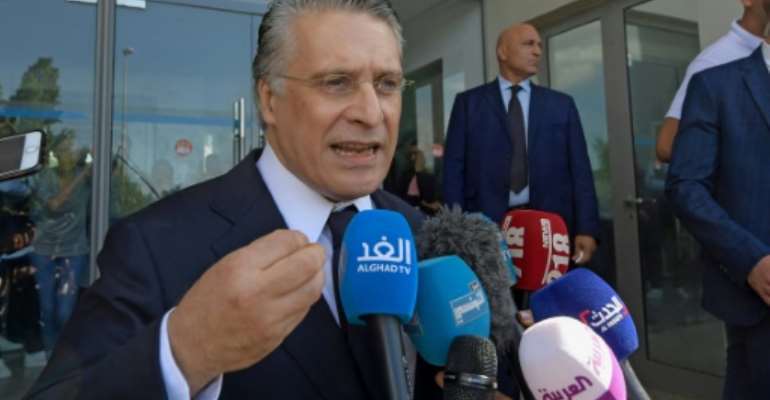 Tunisian presidential candidate Nabil Karoui speaks to journalists after being freed from jail where he was detained for over a month in connection with a money laundering probe ahead of Sunday's election runoff. By FETHI BELAID (AFP)

A business tycoon fresh out of jail and a conservative academic are set to battle Sunday in Tunisia's presidential runoff after the political outsiders swept aside the country's post-Arab Spring establishment.

Seven million voters are expected to return to the ballot box for the final round of the vote, Tunisia's second free presidential poll since the 2011 revolt that toppled longtime dictator Zine El Abidine Ben Ali.

On Wednesday, in the latest twist to the dramatic race, presidential candidate Nabil Karoui walked free from prison after spending more than a month behind bars over a money laundering probe and tax evasion.

The 56-year-old media mogul was detained in August just 10 days before the start of campaigning for the first vote, sparking accusations that his arrest was politically inspired.

He will square off Sunday against blunt-talking independent law professor Kais Saied and the pair are expected to go head-to-head on Friday in a primetime television debate.

After being greeted to a hero's welcome, Karoui on Thursday said "we will wage the battle and we will win" in the runoff.

Highlighting the peculiar trajectory of the race, he lamented the election had devolved into a "tacky soap opera", sarcastically referring to himself as a "mafioso" pitted against an "I don't know what".

There was "nothing positive" to push people to choose, he said.

Announced shortly after the businessman's release, preliminary results from Tunisia's legislative election last Sunday put the Islamist-inspired party Ennahdha on top with 52 out of 217 seats -- far short of the 109 needed to govern.

But more than half of all voters abstained in the parliamentary poll, nearly double the number of non-voters in Tunisia's last legislative election.

TV pundits chalked up the low turnout to voter apathy and a repudiation of established political parties.

While the country has succeeded in curbing deadly jihadist attacks that rocked the key tourist sector in 2015, its economy remains hampered by austere International Monetary Fund-backed reforms.

Unemployment hovers around 15 percent and the cost of living has risen by close to a third since 2016.

Battle of the outsiders

Saied, 61-year-old expert on constitutional affairs, had announced last weekend he was quitting campaigning in order to avoid an unfair advantage over Karoui.

"Now that this obstacle has been lifted he is ready to resume campaigning," his brother Naoufel Saied told a local television channel, after Karoui's release from jail.

He advocates a rigorous overhaul of the constitution and voting system, to decentralise power "so that the will of the people penetrates into central government and puts an end to corruption".

Saied topped the first round with 18.4 percent of votes, the elections commission ISIE said, while Karoui came in second with 15.6 percent, out of a field of more than 20 candidates, including seasoned politicians.

Karoui has burnished his reputation in recent years by using a TV channel he founded to launch charity campaigns, handing out food aid to some of the country's poorest.

One of Karoui's lawyers has said that while the tycoon is now "free", he remains under investigation.