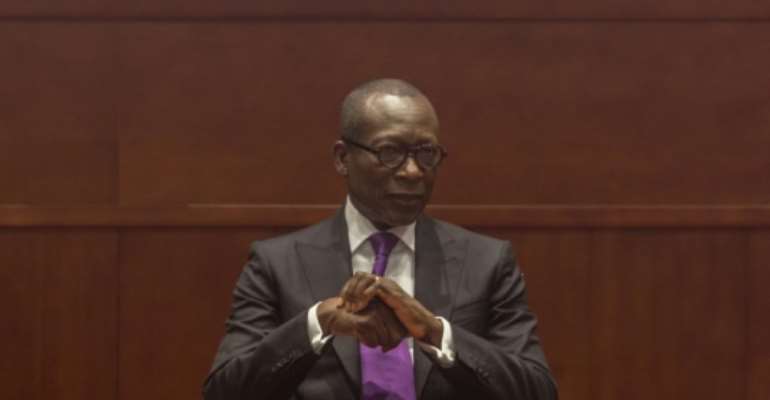 The opposition accuses Talon, a cotton mogul, of taking over key sectors of the economy for personal gain. By YANICK FOLLY (AFP)

Benin's President Patrice Talon on Thursday launched a political "dialogue" to calm tensions sparked by the opposition's exclusion from April elections, but his key foes remain in exile following a crackdown.

The West African nation has faced a political crisis since the parliamentary vote earlier this year that saw Talon's allies win all the seats as opposition groups were effectively banned.

It was the first time in 30 years that the opposition did not contest an election.

The president invited nine political parties to the "dialogue" -- set to last until Saturday -- but key opposition groups have dismissed it as window dressing to mask the former business magnate's increasingly authoritarian rule.

Talon insisted the event was part of his "ongoing concern to involve political actors in the search for compromises to key issues", including participation in elections.

"Our meeting today, far from being a sign of any stress in our democracy, is akin to a check-up requirement when an unusually bad coughing fit occurs," he told participants.

Benin has enjoyed a reputation as one of West Africa's most stable democracies.

Talon -- a cotton mogul who came to power in 2016 -- has been accused of driving his leading challengers into exile with a series of trumped-up legal cases.

Several main opposition groups that were not invited to the official event were staging their own "counter dialogue" to protest against the president.

Talon's opponents have called for the return of exiled leaders, the release of his political foes and for all parties to be allowed to take part in elections.

"It's a drama playing out in our country with a president who has seized key sectors of the economy and who, to protect his personal interests ... is backing a police regime and an oppressive and endlessly corrupt judicial system," former Beninese president Nicephore Soglo told the "counter dialogue."

Talon's main rivals in the last presidential election have had tough sentences passed on them.

In October 2018, Sebastien Ajavon was sentenced to 20 years in prison for trafficking cocaine while the second runner-up Lionel Zinsou got a six-month jail term in August for using fake documents and barred from holding public office for five years.

Covid-19 Lockdown: Jubilee House Empty As Workers Told To Wo...
29 minutes ago

Lockdown: ‘Stop Choking Market To Stock Up Food, We’re Not ...
31 minutes ago