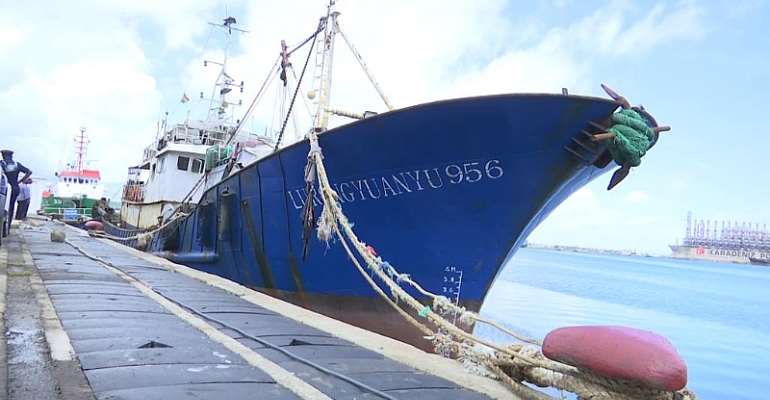 A Ghanaian registered fishing vessel operated by Chinese has been fined over $1 million for illegal fishing and GHc124,000 for having fish onboard.

The vessel had also failed to log the fishing activity in their logbooks.

The fishing vessel, Lu Rong Yuan Yu 956, which was arrested offshore Cape-3-point in June this year by the Western Naval Command in collaboration with marine police and the Fisheries Commission had 27 persons onboard, out of which were 22 Ghanaians and five Chinese.

The Western Regional Fisheries Director, Godfrey Baidoo Tsibu, told Citi News that the owners of the vessel agreed to pay the fine after it opted for an out of court settlement.

The owners have been given 30 days to make full payment.

The presence of the fish on the vessel “meant that we also needed to charge them with the fair market price of that amount of fish on board,” Mr. Tsibu explained.

“There were 405 cartons and 864 slabs of frozen mixed small pelagic fishes generally below that minimum landing size. So when we put together all this, it cost around GHc 124,000.”

The fines were in line with the Fisheries Amendment Act 880.

The Act bolsters efforts to make Regulations to combat Illegal, unreported and unregulated fishing in accordance with the international obligations.

The Director of the Marine Police ACP Iddi Seidu who headed the investigations after the arrest told Citi News that the security agencies are alert to arrest and prosecute illegal fishing vessels.