US warns of sanctions if S.Sudan rivals fail at unity government 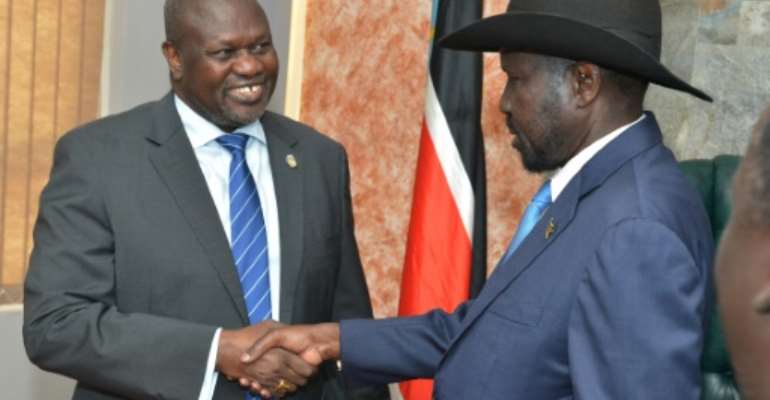 The United States will consider sanctions on leaders in South Sudan if they fail to form a unity government for the troubled young nation by their self-imposed deadline of November 12, a US official said Thursday.

South Sudan's President Salva Kiir and rebel leader Riek Machar agreed in a rare meeting last month to work together and help bring an end to unrest that has killed some 380,000 people and left more than six million people in dire need of food aid.

Bryan Hunt, the State Department's office director for Sudan and South Sudan, warned that Western powers would not accept another delay in the deadline, which was already extended by six months.

"We're not prepared to continue to hear arguments for why more time must be given. We think it's past time, frankly, for the leadership to sit together and begin to find ways to move this country forward," he said.

"Our view is that if the government is not formed by November 12, we're going to need to re-evaluate the relationship between the United States and South Sudan," he told reporters at the US Institute of Peace.

Asked what measures could be taken, Hunt said options included sanctions targeting South Sudan's elite or restrictions on their travel to the United States.

He said the United States was not considering cutting off its $1 billion in annual assistance as it is largely humanitarian, supporting food and other basic needs among ordinary people.

"I don't think we should make them pawns or victims in a game of putting pressure on the South Sudanese government, however tempting that at times may be," he said.

But Hunt and his counterpart from Britain -- which along with Norway make up a troika that leads policy towards South Sudan -- voiced hope the leaders would meet the deadline.

Robert Fairweather, Britain's special representative for Sudan and South Sudan, said Kiir assured him on the unity government during a meeting last week in Juba.

"Certainly it's the most optimistic I had seen him," Fairweather said.

He said that a unity government should offer "a new approach" with ordinary people seeing a "trickle-down effect" of more stability.

The enmity between Kiir and Machar, who lives in exile in Khartoum, plunged South Sudan into war in 2013, just two years after its hard-fought independence.

More than four million South Sudanese -- almost a third of the population -- have fled their homes.