CID Get Drones, Motorbikes To Track Down Marijuana Farms, Peddlers 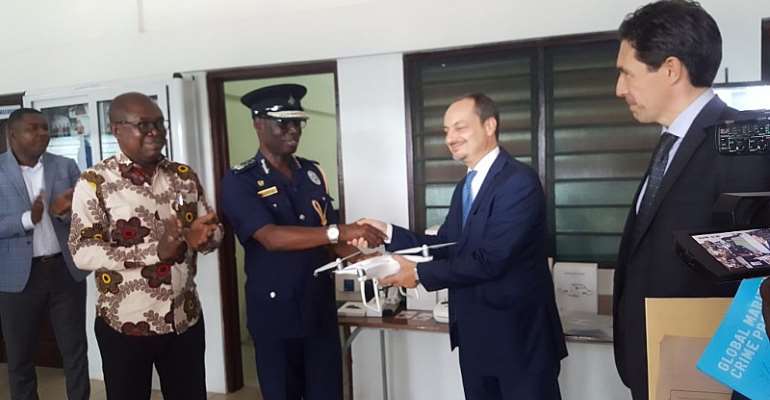 The Italian Government has donated to the Drug Enforcement Units of the CID operating within three regions of the country, two drones and six motorbikes for their operations.

The Italian Ambassador to Ghana, Giovanni Favilli, who presented the items on behalf of the Government of Italy, specifically by the Ministry of Interior Anti Drug Unit, said the motorbikes were to provide for the needs of Drug Law Enforcement Units (DLEU) located in the Bono, Eastern and Volta Regions, after those donated last November for the DLEU in Tamale.

He said the drones were meant to be used all over Ghana to survey areas suspected to host marijuana plantations.

“Technology and equipment are key in supporting Police staff in their job of controlling the territory and fighting crime.

It is a small contribution but it is my hope that the motorbikes and the drones are put to good use and used extensively, to improve police performance and citizens' security in Ghana,” he added.

The Director General in charge of Services, Commissioner of Police, Alex Amponsah Asiamah, who received the items on behalf of the Acting Inspector General of Police, James Oppong Boanuah, thanked the Italian Government for the support.

He said since 2015 the Italian Government has supported the police by building the capacity of personnel both from the junior rank and the senior officers.

He said in 2018 the Italian government again donated two motor bikes to the Drug Law enforcement Unit in Tamale.

“Law enforcement is currently technologically driven, especially in the case of tracking systems and we are really grateful.”

The Deputy Director General In Charge Of The Criminal Investigations Department, Assistant Commissioner of Police, (ACP) George Tweneboah, added that selected officers from the CID drug enforcement Units from across the country before the donation, were given a two-day training in drone piloting techniques to enable them use the drones in fighting crime.

He entreated participants to take care of the equipments to enhance crime investigations.

Present were the director in charge of the drug enforcement unit, Superintendent Hukporti, commandant of the detective training academy, Superintendent Grace Akrofi, Police Attaché at the Italian Embassy, Enrico Biasutti and others.