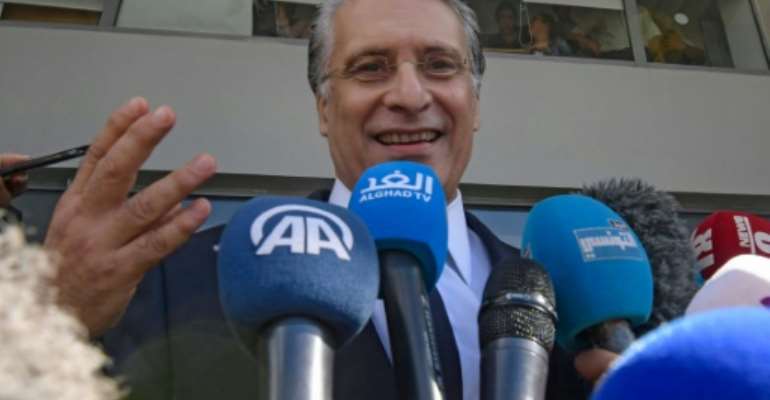 Tunisian presidential candidate Nabil Karoui says he is ready to take on the runoff vote on Sunday against his rival a day after his release from weeks in jail where he was held over a money laundering probe. By FETHI BELAID (AFP)

Tunisian presidential hopeful Nabil Karoui said Thursday he will "wage battle and win" a weekend runoff against a political newcomer, a day after the business tycoon was released from jail.

"There is a day or two left but we will wage the battle and we will win," he said, a day before campaigning wraps up for Sunday's election.

Karoui had been detained since August over a money laundering probe and tax evasion.

He was released on Wednesday to a hero's welcome from his supporters following a decision by the Court of Cassation.

"Yesterday, the judicial system set me free. The independent judicial system... there was no deal (for my release)," he told reporters and supporters outside the headquarters of his Qalb Tounes party.

The 56-year-old had described his incarceration as a "political" move.

"I had hoped that the elections would be pushed back by a week," he said of Sunday's runoff.

His return to the political arena as a free man comes at a time of uncertainty for the country hailed as the sole democratic success story of the Arab Spring.

Karoui will face conservative law professor Kais Saeid in the runoff, and the pair are expected to take part in a one-on-one television debate on Friday night.

His chances of wooing voters got a boost from parliamentary elections held on Sunday.

Qalb Tounes came second with 38 seats, behind the Islamist-inspired Ennahdha party which won 52 out of 217 seats in the national assembly -- far short of the 109 needed to govern.

"I thank the Tunisian people for the trust they put in me despite the defamation campaign of which I was the victim," Karoui said.

"This trust helped me reach the finals and become the second force in parliament," he added.

Karoui said his party has grown to include half a million members since he was jailed -- up from 1,000 -- and he was happy to be back among his political "family".

"I wish to thank the judges who are honourable people and who set me free despite political pressure... they realised that I had suffered from injustice," he added.

One of his lawyers, Nazih Soui, has said that although Karoui is now "free" he still remains under investigation.

A former executive for Colgate-Palmolive who launced a media agency with his brother in 2002, Karoui presents himself as a candidate for the poor.

He burnished his reputation in recent years with a charity show on a TV channel that he founded, travelling the country to hear grievances and distributing aid to needy families.