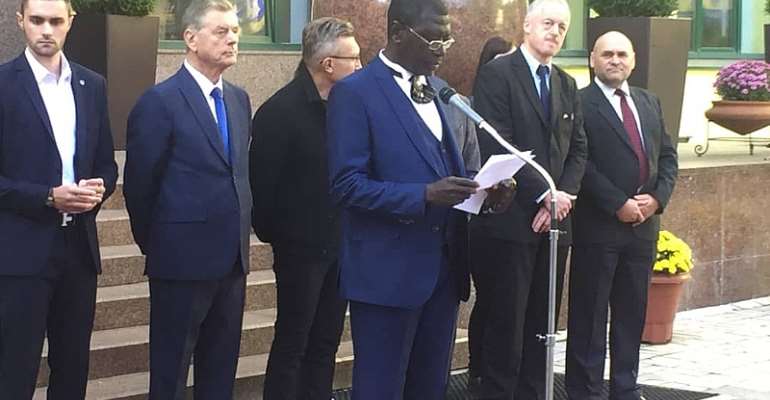 The Centre of Awareness (COA) and Global Peace Mission (GPM), manufacturers of the famous COA FS immune booster and COA 72 injectable, have reached an agreement with the Alfred Nobel University (ANU) in Ukraine for research into chronic diseases.

Part of the agreement is also to promote global peace through a multi-approach strategy, that focuses on the youth in schools, and heads of states of various countries.

The agreement was reached during a visit by Founder and President of COA/GPM, Professor Samuel Ato Duncan to Ukraine as a special guest of ANU at the Unification Day of students from Asia, Europe, America and Africa earlier this month.

Earlier this year, Prof. Duncan was among several Ghanaian achievers ANU presented with honorary professorial and honorary doctorate awards for their excellent achievements.

Prof. Duncan's honorary award was mainly because of the breakthrough manufacture of COA FS immune booster and COA 72 injectable, which are touted as potential cure for HIV, based on tests by independent medical research institutions in Ghana and South Africa.

Following his professorial award, Prof. Duncan has been working with ANU to move his herbal medicine research forward, and that has culminated in this ground-breaking agreement for further research into COA and into other potential cure for other terminal diseases.

Prof. Ato Duncan told Adom News from his base in Ukraine that the ultimate goal is to "promote global peace by finding solutions to many chronic diseases like HIV, hepatitis B, cancers, kidney failures and others."

He said the process will begin with COA FS and COA 72 with the aim of developing them into drugs that meet WHO standards as the drug of choice for the cure of HIV.

“Before a drug can be certified by WHO as a drug of choice for public use, it has to go through rigorous processes, including tests on at least five continents and so as we start from Ukraine, we will do similar tests in different parts of the world to meet WHO standards,” he said.

The COA Boss noted that such rigorous research costs a lot of money and so far COA on its own has spent over US$20 million researching the drug, but this it would collaborate with its partner institutions like ANU and others to raise funding to the subsequent tests.

Research in Ghana
Prof. Duncan also hinted that back in Ghana, government has also asked the Ghana Aids Commission (GAC) to work with COA to ensure further test of the COA FS and COA 72, adding that the Noguchi Memorial Institute has offered to do the clinical tests so they are working towards that.

“I trust that the government and the GAC will make good their word and ensure that the tests are done as soon as possible for the benefit of the country,” he said.

Prof. Duncan noted that if the COA drugs become the drugs of choice for the cure of HIV, Ghana stands to gain billions of dollars of revenue flowing from all over the world to boost the economy.

100 Scholarships
He also said as part of the need he has with Alfred Nobel University, COA would from next year sponsor at least 100 Ghanaian students to that university every year to study various courses of their choice so they can contribute to national development.

“Several brilliant students from poor homes are benefitting from the government’s Free SHS policy but when they complete, some of them may not have money to continue to the tertiary level and that is where we come in to help at least 100 next.

“If things go well for us we will increase the numbers in the subsequent year and beyond. I believe other institutions can also do same to ensure that our youth are properly educated to contribute to national development,” he said.