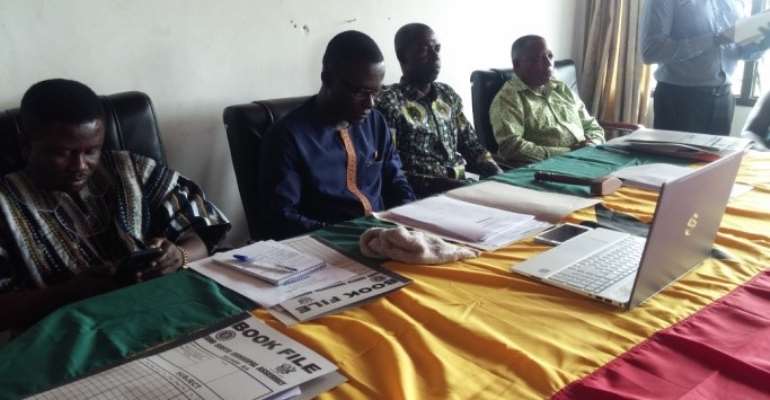 Some of the Dignitaries and Assembly Members

The Second Ordinary meeting of the third Session of the Tano South Municipal Assembly has been held at Bechem, the Municipal capital.

The meeting which was held at the Tano South Municipal Assembly’s Conference Hall saw dignitaries like Hon. Benjamin Yeboah Sekyere, the Member of Parliament for Tano South Constituency and Deputy Minister of Ahafo Region, Hon. Collins Offinam Takyi, the MCE for Tano South, Hon John Dadzie, the presiding member for the assembly, assembly Members, Heads of the Department, and Nana Ampong Kromantang II, the Krontihene of Techimantia.

Some of the Dignitaries and Assembly Members

In an opening address, Hon. John Dadzie the Presiding Member of the Tano South Municipal Assembly welcomed all and sundry to the Second ordinary meeting which happens to be the last meeting of this Assembly.

Hon. Dadzie thanked Hon. Benjamin Yeboah Sekyere, the MP for Tano South Constituency, Hon. Collins Offinam Takyi, the MCE for Tano South, Nananom, Heads of Department and staff of the Assembly including the Security agencies for their support and cooperation during their tenure as Assembly Members. He thanked the government for the distribution of motorbikes to Assembly Members to enhance their work as assembly members and urged hon. Members to take good care of the motorbikes and also adhere to safe riding in order to achieve their goals of which they were distributed to use.

He said the Assembly is scheduled to be dissolved on 7th October 2019, however the Electoral commission has set 17th December 2019 for the election of new Assembly Members as well as a referendum on Article 55(3) of the 1992 constitution to pave way for election of Metropolitan/ Municipal/ District Chief Executives on partisan line, he called the blessing of God for the assembly members who wish to seek for re-election and wished them a fruitful conduct of the elections. He used the meeting to call on Assembly members to educate the citizenry to participate in the election when the time comes to deepen our democracy and effective local governance.

In his short but impressive speech, Hon. Benjamin Yeboah Sekyere, the MP for Tano South Constituency and Deputy Minister of Ahafo Region expressed his profound gratitude and commended the Assembly Members for making time out of their busy schedule to attend this important meeting and informed them not to engage in meaningless politics to bring disunity among them.

Hon. Sekyere commended all outgoing Assembly for their support in the creation of Ahafo Region to champion the development projects the residents had cried for many years. On national distribution of government resources, he said government would construct Ahafo Regional Education office and bungalows for the staff of the education directorate especially the municipality directorate at Bechem to boost an infrastructural development in the Municipality.

Hon. Sekyere said peace is relevant when it comes to development, and however informed residents in the Municipality to avoid intermittent attacks on Police personnel. This he said would go a long way to make the municipality effectively fight against criminal activities.

On the national league table for assessing the performance of the MMDAs, he said last year the Tano South Municipal Assembly recorded appreciable marks and eventually placed the Assembly at the better position on the league table and thanked the assembly members for supporting the management of the Assembly to execute some of the projects to improve the living standards of the people.

Hon. sekyere said measures are put in place to reduce an open defecation, the government through the Tano South Municipal Assembly has started One – House, One –Toilet project to ensure proper sanitary condition is prevailed in the Municipality.

In his address the MCE for Tano South Municipal Hon. Collins Offinam Takyi said it is heartwarming to address another ordinary meeting for the Tano South Assembly which happens to be the last and final General Meeting of the Assembly and thanked them for their individual contributions as honourable members representing their various areas and their selfless services they have collectively and individually rendered to the assembly.

Hon. Takyi said, it is instructive to note that the current session of the Assembly was sworn into office on Monday, October 5, 2015 for a four year term and therefore come 12 midnight of Saturday, October 5, 2019 the tenure of office of the Honourable House together with all Town and Area Councils as well as Unit Committees stand dissolved as directed by the authorities of Ministry of Local Government and Rural Development.

On referendum, Hon. Takyi said, fresh elections would be conducted throughout the country to select new Assembly and Unit Committee Members to form the next Assemblies on the 17 December 2019 and stressed that, a referendum would be conducted to amend Article 55(3) of the 1992 Constitution to allow the election of the Metropolitan, Municipal and District Chief Executives (MMDECs) with political party participation in the local and District level elections under the theme “Amending Article 55(3) to improve citizens participation in democracy”

He said, for the amendment to take place, at least 40% of the qualified voters must turn out to vote and 75% should be in favour of the bill and used the occasion to inform all legible voters to participate in the elections.

He therefore mention three main sources of funding to the assembly and these are the quarterly releases from the District Assembly Common Fund (DACF) Secretariat, expected Annual Releases of funding from District Development Facility (DDF) and funds that we generate internally (IGF). And said the main challenge in its attempt to implement its planned programme and projects is constrained funding

He continued that, the Assembly in collaboration with the Ghana First Company Limited commenced the construction of Public toilet across the Municipality and Seventeen (17) toilet are at various stages of completion. Though the construction of this toilet has stalled owing to the delay in the release of funds to contractors for work done the company and the contractors have resolved their differences and as a result they will retune to site once they receive their payments. In line with the sanitation projects and programme in the Municipality.

A number of toilets and water projects are being selected and undertaken in some selected communities through the instrumentality of Hon. Benjamin Yeboah Sekyere Member of Parliament/ Deputy Minister of Ahafo Region.

He announce to the house that Tano South Municipal Assembly has been selected to be part of the Ghana Productive Safety Net Project (GPSNP) and the objective of this project is to support the government to strengthen safety systems that improve productivity of the poor. He said, what was expecting of them as an Assembly was to prepare and submit work plan through the Regional Coordinating Council, Goaso and a team from Ministry of Local Government and Rural Development has come to verify some of the communities for the smooth take off of the project and it is going to add up to the numerous interventions by government to improve the financial and economic condition of the extremely poor households.