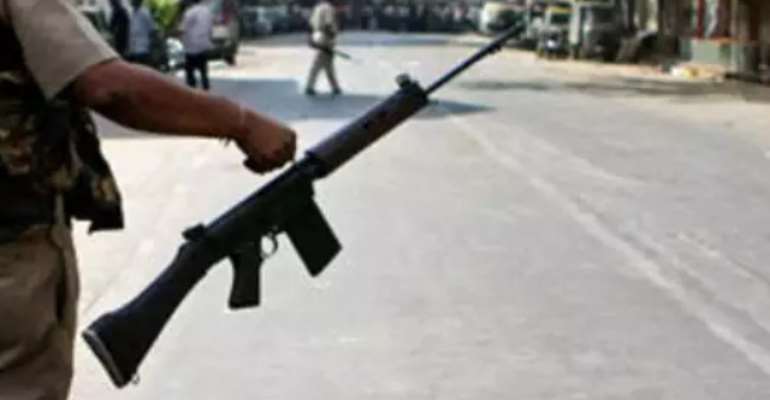 Some of the most memorable images of the late Diana, Princess of Wales, show her wearing a protective suit while touring a minefield in Angola in 1997 to raise awareness of the devastating effects of land mines.

After meeting 13-year-old Sandra Thijika, who lost her leg after stepping on a land mine, the princess told the media, “I’d read the statistics that Angola has the highest percentage of amputees anywhere in the world…that one person in every 333 had lost a limb, most of them through land mine explosions.” She used the occasion to call for a global effort to address the problem.

Two years later, on March 1, 1999, the Convention on the Prohibition of the Use, Stockpiling, Production and Transfer of Anti-Personnel Mines and on Their Destruction (also known as the Ottawa Mines Ban Treaty or simply the Ottawa Treaty) entered into force.

By 2018, 164 states, including 50 African states, had signed up, committing to “not using, developing, producing, acquiring, retaining, stockpiling, or transferring anti-personnel landmines.”

However, 20 years since the treaty, there are still more than 50 million stockpiles of land mines, mostly in Angola, Afghanistan, Cambodia, Chad and Iraq, according to the US-based nonpartisan Arms Control Association, which is dedicated to drumming up support for arms control policies globally.

In a similar vein, the International Campaign to Ban Landmines, a network of NGOs, is upbeat about progress made so far with the Ottawa Treaty, reporting that 28 states have completely cleared and ended the use of land mines. These include South Africa, Mozambique, Madagascar, Ethiopia and Chad. Mozambique was declared free of land mines most recently, in 2015.

Non-state actors
While the treaty has proved successful with states, the bigger problem remains that of nonstate actors laying their hands on improvised explosive devices (IEDs), which include land mines.

The United Nations Mine Action Service (UNMAS) IED adviser, Bryan Sand, defines as an IED anything that is “activated by the presence, proximity or contact of a person.”

“IEDs can be broken into three broad categories,” Mr. Sand says. “The first category consists of victim-operated IEDs—these meet the definition of a land mine; the second category are timed devices that are set to detonate at a specific time; and the third category is command devices, which can be operated when one either presses a button or steps on a switch, etc.”

While land mine use is decreasing, Mr. Sand says there is an upswing in the number of IEDS being used by nonstate actors. “IEDs are a huge problem, because individuals who do not have access to state munitions resort to improvised devices.”

Mr. Sand adds that terrorist groups such the Boko Haram in Nigeria and Al-Shabaab in Somalia are using IEDs as instruments of terror. “They are using these devices to circumvent what has been largely a very successful Ottawa Treaty on land mines.”

In a broader sense, IEDs are unpredictable, as they are not manufactured within the same set of specifications as regular land mines. Most IEDs are also cheaper and easier to manufacture.

How much impact can an IED have?
He elaborates: “When you look at the cost of an AK-47 vis-à-vis its effect, it is limited compared to the cost of an IED that can destroy many more lives and several hundred thousand dollars’ worth of property. This is why IEDs are weapons of choice for terrorist groups across Africa and globally.”

One of the loopholes in the Ottawa Mines Ban Treaty is that it targets land mines, not the full range of IEDs, which include antitank mines, booby traps and other devices.

Because IEDs are multi-dynamic, regulation is complex, Mr. Sand concedes. “It is difficult to enforce regulation on things that can also be used as technology. If I am activating an IED using a cell phone, how would one know that the cell phone is for personal use or for a nefarious purpose?” he asks rhetorically.

From the UN’s point of view, Mr. Sand says IEDs hinder the ability to deliver humanitarian aid—convoys that ought to move across roads can’t operate. “Look at Nigeria and Cameroon—they’re diverting resources that could be better spent elsewhere than dealing with IEDs,” he points out.

AU intervention
The African Union and its member states are looking to develop a strategy to deal with IEDs, while the UN is doing the same thing “so that a whole-of-government or whole-of-institution approach can be adopted…to get everyone on the same page,” says Mr. Sand.

For example, UNMAS undertook a mapping of the entire UN system and found, surprisingly, that 28 different UN agencies are dealing with individuals and groups affected by IEDs. UNMAS envisions a unified systemwide focus on IEDs.

Regarding deactivating land mines, much has been done, but there is still a lot more to do, says Mr. Sand. Countries such as Mozambique, Angola and Somalia, hit hard by land mines used in wars and conflict, are deploying technological tools such as electromagnetic radar and even using rodents to detect and neutralize land mines.

Military records, maps and information from local populations have also been crucial in detecting land mines. “It’s a huge amount of work and engagement with the local population, with the government, with civil society and NGOs,” explains Mr. Sand, and adds, “The UN assists in coordinating so much of this. It’s a bigger process and it’s resource driven.”

UNMAS also makes efforts with its limited resources to assist land mine victims. Mr. Sand says, “We want to help the victims and survivors in terms of rebuilding their lives. For example, we had a survivor come [to UN headquarters in New York and] speak about his experience—losing three of his limbs to an IED attack and the resources that were made available to him, and how he survived. It was truly remarkable.

“We need to make our resources more available across the world, so bettering ourselves in that delivery is important.” UNMAS, he concludes, envisions a world where people do not die because of land mines or IEDs.