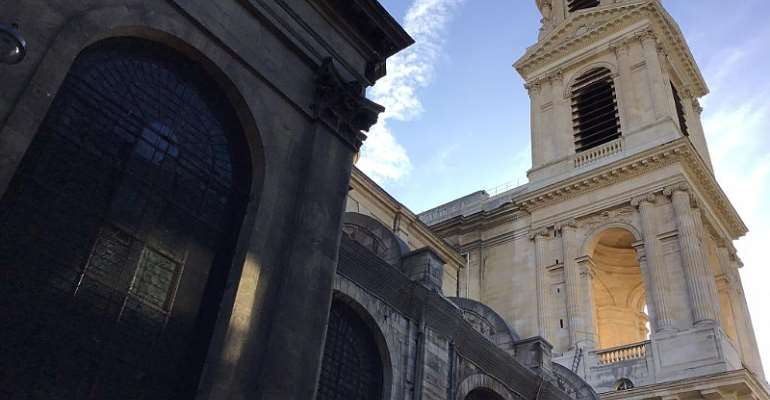 As Notre-Dame remains closed for reconstruction after the fire this year, RFI explores some of the lesser-known secrets of Saint-Sulpice, Paris' second-largest church.

Tour operators were soon to cash in, and even today, fifteen years after the bestseller was published, 'Da Vinci Code' tours stop by the Saint-Sulpice church.

[Scroll down right to the bottom of the article to see RFI's exclusive photos of Saint Sulpice's hidden treasures.]

The biggest ecclesiatical hoax of the 21st century?

Da Vinci Code is an archaeological thriller which takes the reader on a cryptic treasure-hunt through Paris. A series of historical codes leads to the Holy Grail, claiming it to the tomb of Mary Magdalene, Jesus Christ's follower according to the gospels.

But the problem arose when author Dan Brown insisted that everything in his novel was fact, and not fiction.

Prominent historians and theologists have painstakingly pointed out that the book is historically inaccurate, that all of Dan Brown's 'theories' are scandalous approximations and re-interpretations of history, art and Christianity.

'Fake news' as the current American president would say.

But that did not stop the Da Vinci Code tours passing through.

The Saint-Sulpice trail
RFI spoke to Clément Savary, a student of art history and one of Saint Sulpice's official guides.

"These Da Vinci Code tours are like Jack the Ripper tours of London", he said.

"More people go on these commercial tours than on our official church tours. Sometimes it's so frustrating to reply to the same questions. And to such absurd theories."

So what do the Da Vinci Code fans want to see at Saint-Sulpice?

"The Gnomon is the main element linked to the Da Vinci Code.", Savary explains. "It's an ancient sundial that indicates midday when the sun is at its highest point."

On the floor in front, a line leads from the Gnomon to the other side of the church.

This, Savary explains, is the Saint Sulpice meridian.

"They [the Da Vinci Code trail-seekers] call this the Rose Line - a term invented by the author."

Savary points above to monogram a few metres away from the Gnomon.

"See that? The letters 'SP' represent Saint Pierre, one of the two patron saints of the church."

Savary grimaces.
"In Da Vinci Code, the letters are supposed to refer to the Priory of Sion, a secret organisation."

These ideas, Savary says, date back to the 1920's and 30's, where people started speculating about a priest in the French village Rennes-le-Chateau.

"In the 19th century, a priest reconstructed the church in Rennes-le-Chateau like a majestic villa. We do not know how he got the money." Savary says.

"But to talk of a secret treasure, a secret organisation..."

He shakes his head in disbelief.
Delacroix and the Templars curse
Savary takes us to the Delacroix chapel, on the right after entering the church.

He shows us Delacroix's 'Saint Michel killing the dragon'.

"Those who want to see a conspiracy everywhere say that the iron crown of the dragon represents the crown of the French king, and that Saint Michel killing the dragon is actually the last Templars knight bringing down the French monarchy, according to an ancient curse."

"How imaginative these people are!", Savary says, round-eyed with disbelief.

"To think that Delacroix had all this in mind when he painted this common Christian symbol!"

Real treasures, beyond the Da Vinci code
Besides its majestic vaults, tall arches and magnificient chapels, Saint-Sulpice has been a landmark in French society.

RFI was taken on an exclusive tour of two closed chapels in the Saint Sulpice, only accessible by special request.

The Assumption Chapel was built in the 18th century for the parish's poorest. Mass used be held here early in the mornings.

Visitors and worshippers can contact the Saint-Sulpice church directly to visit these and more hidden secrets of the church.