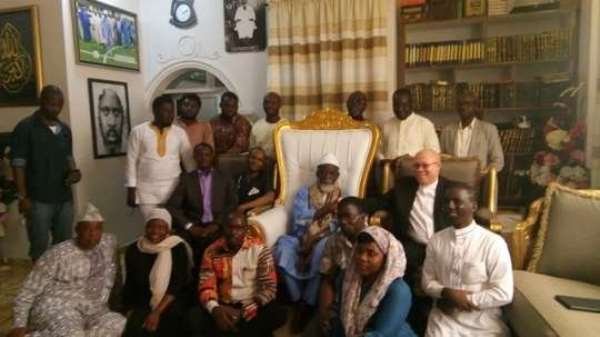 Moses Foh-Amoaning, the Executive Secretary and Spokesperson for the National Coalition for Proper Human Sexual Rights and Family Values has urged the Akufo-Addo government to clearly state its position on the Comprehensive Sexuality Education programme for better understanding.

He said, even though the President, Nana Addo Dankwa Akufo- Addo, in a recent address allayed the fears of the public about the intentions of the programme, the posture of some government appointees on the policy gave the Coalition and the public a cause to worry.

Mr Foh-Amoaning made the call when the Coalition paid a courtesy call on Sheikh Osmanu Nuhu Sharubutu, the National Chief Imam, at his residence in Accra.

“We are proud because some of us have implicit faith in this President because he is the one who came to power using the word of God, ‘the battle is the Lord’s’, so we knew that he was not going to do anything that will be counter to what God's word said and so we are happy he said that.

“However, we also hope that those working under him will have some respect for the President because when the Chief Executive of this country for who Ghanaians have voted for says I don't want this to happen in my count, don't go round limiting what he has said”.

“They have no business doing that because this is a country of law”, he said.

The meeting was aimed at soliciting support from the National Chief Imam ahead of the Coalition’s World Congress of Families Summit in October and November this year.

The Congress is aimed at bringing families from around the world together to deliberate on issues that affect it and find solutions to such challenges in order to maintain a natural family unit.

Mr Foh-Amoaning who is also a Law lecturer and a critic of the Lesbian, Gay, Bisexual and Transgender (LGBT) movement also said there was the need for the state to have a national policy on the subject matter to avoid further misinterpretation by the public.

This, he said should be done on a wide spectrum from, legal point of view to scientific, health points of view as well as the international relations to ensure common understanding.

Sheikh Osmanu Nuhu Sharubutu on his part assured the Coalition of his office’s support to ensure that it achieved its goal.

He also called for unity among all religious organisations and well-meaning Ghanaians to ensure that the values of the society were upheld.

The National Coalition for Proper Human Sexual Rights and Family Values is a tripartite coalition made up of Christian community; the Christian council, Catholic secretariat, Catholic Bishops conference, Ghana Pentecostal and Charismatic Council, the Muslim community and the Traditional rulers.