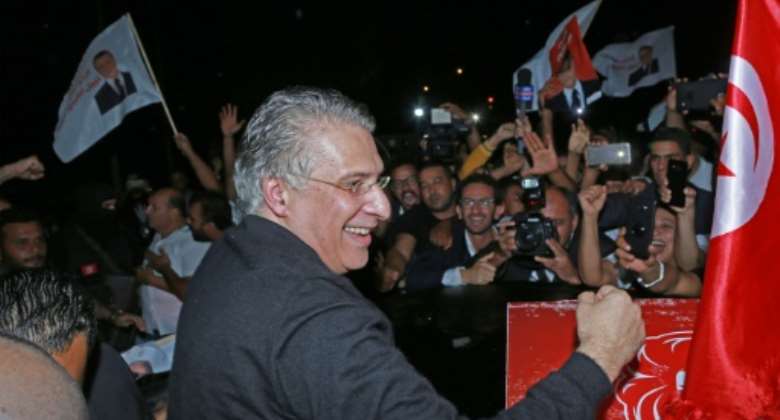 Tunisia's presidential candidate Nabil Karoui received a hero's welcome as he walked free from jail Wednesday, just days ahead of a runoff against a political newcomer.

Karoui's release is the latest twist in a shock election dominated by political outsiders in the country whose 2011 revolution sparked a wave of regional uprisings.

His return to the arena as a free man comes at a time of uncertainty for the country hailed as the sole democratic success story of the Arab Spring.

An AFP journalist outside Mornaguia prison near Tunis saw a throng of media mogul Karoui's supporters waving Tunisia's red-and-white flag and campaign banners as they jubilantly cheered for him.

An elated Karoui then left the scene in a black Mercedes, without speaking to the press.

The Court of Cassation's decision to free Karoui, a business tycoon who has been detained since August over a money laundering probe, comes ahead of Sunday's final presidential vote.

Despite being behind bars, he won 15.6 percent of votes in the first round of the presidential poll.

The runoff comes as Tunisia appears poised for complex, rowdy negotiations to form a government.

Announced shortly after Karoui's release, preliminary results of last Sunday's legislative election showed Islamist-inspired party Ennahda came out on top with 52 out of 217 seats -- far short of the 109 needed to govern.

In the run-up to the parliamentary poll, Ennahda and Qalb Toues had officially ruled out forming an alliance.

The abstention rate was 58.6 percent, nearly double that of the last legislative polls in 2014, despite the post-revolution constitution putting parliament at the heart of political power.

TV pundits contend that the high abstention rate is not only a mark of voter apathy, but also a repudiation of the parties taking part.

It was a similar sense of rejection of the establishment that catapulted political newcomers Karoui and rival contender conservative law professor Kais Saeid to the lead in the September 15 presidential first round.

The sidelining of Tunisia's post-Arab Spring political class in the vote was rooted in frustration over a stagnant economy, high unemployment, failing public services and rising prices.

While the country has succeeded in curbing jihadist attacks that rocked the key tourist sector in 2015, its economy remains hampered by austere International Monetary Fund-backed reforms.

With the contenders now free to campaign on a level playing field, the pair will face off in a televised debate Friday, one of the organisers told AFP.

The debate is expected to begin at 9:00 pm (2000 GMT) should Karoui confirm his presence, national television channel Wataniya said.

Wataniya has also invited Karoui for an on-screen interview Thursday.

Previous requests to release Karoui had been turned down and he has branded his arrest as "political".

Karoui's lawyer Kamel Ben Messoud on Wednesday said the Court of Cassation had "annulled the detention order" against his client.

Another of his lawyers, Nazih Souei, said Karoui remains under investigation, "but he is free".