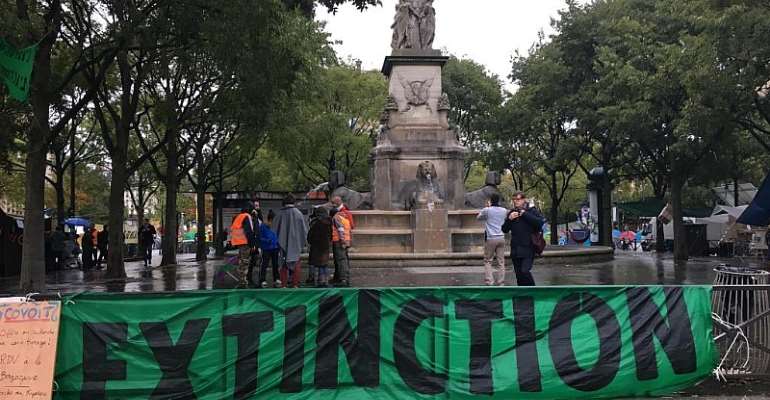 Several hundred environmental activists blocking a central square in Paris as part of the international movement Extinction Rebellion discussed how to continue their occupation as it entered a third day on Wednesday.

As the rain eased off on Wednesday morning, several dozen activists held a meeting to decide how to proceed with the Paris installment of the Extinction Rebellion occupations in about 60 cities around the world this week.

Some 200 people had spent the two previous rainy nights sleeping in tents or under tarps at the Place du Châtelet in central Paris, just steps from the Pont au Change bridge and the central island, the Ile de la Cité.

Several hundred more have been coming to maintain roadblocks and hold conferences and debates during daylight hours. Activists say some 2,500 have signed up to participate.

Their demands come down to facing the reality of climate change, achieving net zero carbon emissions by the year 2025 and setting up citizens' assemblies around the world to apply solutions.

Civil disobedience
One of the premises of Extinction Rebellion is that disruptive actions are necessary to achieve any of these.

“The usual democratic system is unable or unwilling to take the necessary steps to save us from catastrophe,” said Bas Spruijt, a 23-year-old student from the Netherlands living in the Cévennes mountains in central France.

“History has shown that through disruption like this, we create a crisis that is impossible to ignore and will create the necessary debate.”

Much of the discussion had to do with building the movement so it continues beyond the occupation.

“We're giving people the chance to learn and grow, so the movement can snowball, and we can assemble the critical mass that we need to push decision makers into taking the decisions that are actually going to have an impact,” said Susie Bayley, 44, a British activist living in the French region of Normandy.

But with French officials voicing disapproval over the disruption caused by the recent actions of the movement, activists were conscious of a need to stay on message.

“We're going to start more conferences and do more to inform,” said Martine, 41, a translator. “It's not a festival and we're not here to annoy people. We're here to denounce climate and ecological breakdown.”

Police evacuation
Activists also wondered how long it would be before they are ordered to evacuate the square, even though security was light, with a few police vans in nearby streets and some officers observing from the perimeter.

“We never know how the police is going to react, especially in France where they've been stressed out by other civil movements,” said Bas Spruijt, namely in reference to Yellow Vest protests over the past year.

Others remember a heavy-handed evacuation of another Extinction Rebellion event on a nearby bridge in June.

“I think they can't intervene the same way they did in June, because they reacted really brutally,” Martine said. “It's a big dilemma for them to know what to do now.”