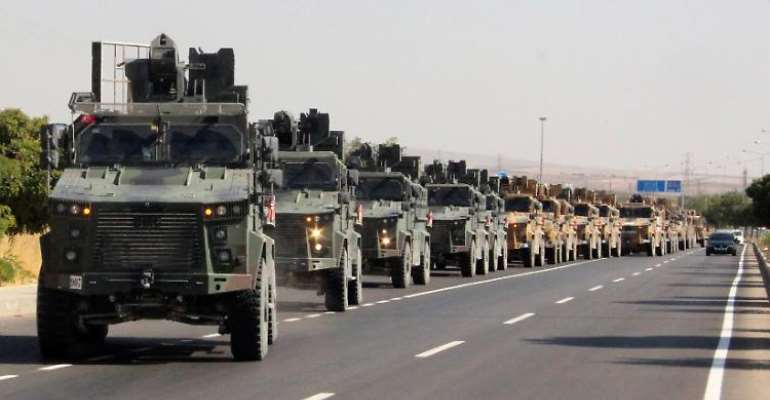 For days the Turkish president has been announcing the army's invasion of neighbouring Syria. Now Erdogan announces that the deployment has begun. He calls it "Operation Source of Peace". The Kurdish forces on the Syrian side of the border announce a general mobilization.

The Turkish president Recep Tayyip Erdogan confirmed the beginning by Twitter. "Our armed forces, together with the Syrian national army in northern Syria, have started Operation Source of Peace against the PKK/YPG and DEAS terrorist organizations," he wrote.

The aim of the operation is the Kurdish YPG militia, which controls a large area on the Syrian side of the border. Turkey sees it as an offshoot of the banned Kurdish Workers' Party PKK and sees the members of the militia as terrorists. Erdogan wrote: "Our goal is to destroy the terror corridor that they want to build on our southern border and bring peace and quiet to the region".

The Syrian news agency Sana quoted a correspondent as saying that "Turkish aggression" had begun in the border town of Ras Al-Ain. Ras al-Ain is located opposite the Turkish town of Ceylanpinar in the southeast Turkish province of Sanliurfa. Sanliurfa is the command centre for the long planned offensive.

In view of the increasing threats of Turkey and its Syrian "mercenaries", all were called upon to go to the border in order to resist in these "critical historical moments", according to a statement. Kurds worldwide were called upon to demonstrate against the offensive.

The invasion followed conflicting signals from the USA. They had first withdrawn their troops from the border region at dawn on Monday. In a surprising statement from the White House, they signaled that they no longer wanted to stand in the way of an offensive.

After sharp protests also from the Republicans' own ranks, US President Donald Trump made a partial turnaround and threatened Turkey that every "casual or unnecessary" fighting action would be "devastating" for its economy and currency. On Tuesday he stressed that the USA had not abandoned the Kurds and continued to support them financially and with weapons.

The Syrian Democratic Forces (SDF) led by the YPG have long been a close ally of the US in the fight against the terrorist militia Islamic State (IS). Their troops took action against the extremists on the ground in Syria and were able to occupy important areas in northern and eastern Syria.

Comprehensive war along the entire border
Turkey wants to expel the Kurdish militias from the border region and settle Syrian refugees currently living in Turkey and Europe in a so-called "security zone". Since the beginning of the civil war, Turkey has taken in about 3.6 million refugees in neighbouring Syria. In the meantime, however, the welcome culture lived by many people at the beginning is being overturned, partly because of the poor economic situation in the country.

In recent weeks Turkey has aggressively promoted the zone - and funds for the development of infrastructure - during a visit to Ankara last Thursday and Friday by the German Interior Minister Horst Seehofer. Seehofer said to German journalists: "I have clearly said that there are many governments, including ours, which have their problems there".

Turkish President Erdogan had already announced on Saturday to party members in Ankara that Turkey was on the verge of military action. A spokesman for the SDF had then announced fierce resistance. "We will not hesitate to turn any attack from the Turkish side into a comprehensive war along the entire border to defend ourselves and our people," Mustafa Bali wrote on Twitter.

Criteria of a military occupation
The SDF felt betrayed by the withdrawal of the USA from the border region. "The US forces on the ground have shown us that they don't value friendship and alliance," wrote SDF spokesman Bali on Twitter. He added: "We don't expect the US to protect Northeast Syria." But they owed "the people here" an explanation of their failure to meet their obligations.

Turkey had previously moved twice to Syrian territory, but both times west of the Euphrates River. In 2016, they drove the IS from the border with the offensive "shield Euphrates" in the vicinity of the Syrian town of Jarabulus, but also fought the YPG. At the beginning of 2018, rebels supported by the Turkish army took part in an offensive against the YPG...YPG is an acronym whose translation means People’s Protection Units in the Kurdish border region of Afrin.

Till tody, the Turkish army controls an area there together with allied Syrian rebels. The house of representatives came in a scientific opinion in 2018 to the conclusion that the Turkish presence meets all the criteria of a military occupation.