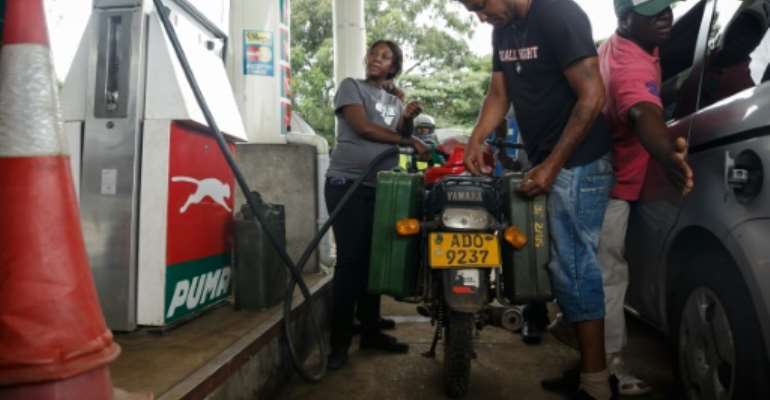 Fuel price increases are one of the other measures the government has introduced to deal with the crisis. By Jekesai NJIKIZANA (AFP)

Zimbabwe on Wednesday quadrupled electricity tariffs amid crippling power shortages which have plunged parts of the country into darkness for up to 18 hours a day and forced businesses to operate at night.

Zimbabwe's economy is caught in a crisis with shortages of fuel, medicine, and currency as well as hyperinflation which has seen many families living on a single meal a day.

Citing "the depreciation of the local currency," the Zimbabwe Energy Regulatory Authority (ZERA) said the price of electricity would jump to around 162 Zimbabwe cents (11 US cents) per kilowatt hour up from 38 Zimbabwe cents.

It was the second tariff hike in two months. In August authorities imposed price increases of up to 400 percent.

The ZERA said despite the August tariff hike the company was still unable to supply enough power, leading to long hours of outages commonly known as load-shedding.

The latest increase should result in "a significantly improved electricity supply, reduced load-shedding hours and improved reliability of supply" as the Zimbabwe authorities will import electricity from neighbouring countries, ZERA said.

The move came days after the government increased the price of fuel by more than 25 percent adding to the woes of the majority of Zimbabweans struggling with spiralling living costs.

The worsening economic troubles have forced leading British banker, Standard Chartered Bank, to close six of its nine branches in the country.

President Emmerson Mnangagwa, who took over from long-time ruler Robert Mugabe, who died in September, has promised to revive the economy, but Zimbabweans say conditions in the country have gotten worse.

The economy has declined even further, with goods prices skyrocketing and annual inflation peaking at 176 percent in June, before government stopped publishing inflation statistics.

The International Monetary Fund said Zimbabwe's August inflation rate accelerated to 300 percent and some economists estimate that the real rate may be double that figure.