Why Menstruation is the next frontier for French feminists 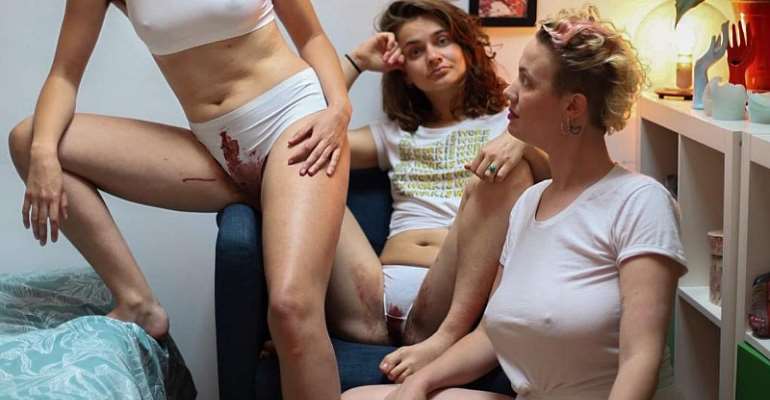 Menstruation may not seem like an obvious focus for feminists, but period activism is a growing phenomenon in France, with young women posting photos of themselves without protection, bleeding on their clothes, in an effort to normalise what has been, until now, a taboo subject.

Eva-Luna Tholance, 22, is an editor for the web platform Cyclique (Cyclical), which focuses on menstruation and sexual health. She's always been fascinated by the menstrual cycle, and she sees fighting taboos around it as a key feminist fight.

Q: When did you first learn about menstruation in school?

Eva-Luna Tholance: I learned about it in a sexual health class when I was 13, which is when most people already have their period.

And it was very factual. Menstruation wasn't taught as something that happens in my body. It was just something scientific, that we had to learn because it was part of the curriculum.

Q: Where do periods and menstruation appear in French culture?

E-L T: It doesn't really appear anywhere. That's the thing about a taboo, no one talks about it. We have jokes about it. One I really like is the expression 'The British are coming'. Because they were dressed in red. You say that when you are getting your period.

We have a bunch of phrases to talk about it, like 'I've got my reds'. One I didn't know that I learned recently is 'I've got my bears'.

Q: Things seem to be changing in France, with newspapers like Le Monde publishing a series on menstruation recently, and even government ministers talking about it. What's changed?

E-L T: It started with the tampon tax. Tampons used to be taxed as luxury items at 20 per cent, whereas primary-need items were taxed at 5.5 per cent. There was a protest several years ago, to have tampons taxed as primary-needs items, like shampoo or bread or toilet paper.

That happened, and that's when period activism started in France. Now it's a big subject in feminism. Gynecological health in general is a big subject, and menstruation is an important part of that.

It also has specific issues. There's a huge taboo around menstruation, and there are some illnesses connected to it, like endometriosis.

Q: One issue that has come up with is menstrual precariousness or menstrual poverty. That is something that Cyclique has addressed. What does that mean?

E-L T: Menstrual products are very expensive, and not everyone has access to them, especially homeless people. Some people use dirty socks or dirty newspapers or anything to keep themselves clean.

The state secretary for equality in France, Marlene Sciappa has started to look into menstrual poverty to try to find ways to counter it.

Q: What about sick leave: Can you get a sick day when you are on your period in France?

E-L T: There's no menstrual leave in France, and if you bring it up to human resources, it's a bit weird.

It is something that should be talked about, because sometimes you get your period, even without endometriosis, you feel like hell, and you need a sick day. It should be normalised.

Q: Things are chaining institutionally, but it also seems like the conversation has started more from individuals, in popular culture, like on Instagram. I'm thinking about the young woman who posted photos of herself in April without menstrual protection, bleeding on her leggings. It caused quite a stir.

E-L T: Yeah, Irene. She did this to talk about menstrual poverty. What was good about it is that she could touch younger people. She talks about sexual health and feminism in general.

We have had people upset with our own work, showing menstrual blood. People tell us it's something that must stay private. Obviously we disagree, but they're the prime example of why we're doing this.

Q: What would you like to see change in France?

E-L T: I just want to see people be OK with periods as a natural thing. If people were chill about it, there would be fewer problems.

Q: What about education, should it start earlier in school?

E-L T: If it's in the law and people aren't teaching it, what's keeping them from doing it? It's the taboo surrounding sexuality.

It comes full circle: no one wants to talk about it, so no one talks about it.

I think we're getting close with menstruation.
For example, 3-D printed clitorises are mandatory in biology classes as of this year, which means we're going to talk about female pleasure, which is pretty cool. That changed because activists last year were talking about the clitoris everywhere, and now it's a normal subject.

Periods are way more taboo than female pleasure, but we can dare!