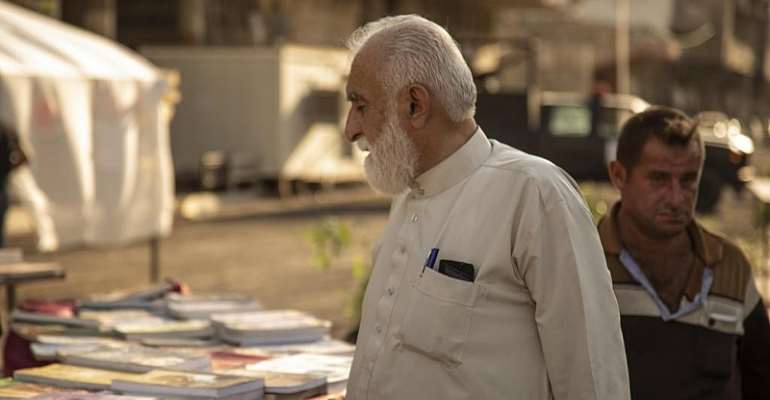 Literature and poetry are regaining popularity in the Iraqi city of Mosul two years after its brutal occupation by the Islamic State armed group that branded artists as criminals.

Winds of change are blowing across the fertile plains of Iraq's northern Nineveh province where muslin cotton was once grown in abundance and traded on the Silk Road that passed through the region. The first book festival in over five years has been successfully held in Mosul, the provincial capital.

“It is unbelievable to think that in the very same street where the book festival was held, the Islamic State executed two booksellers,” recalls Omar Mohammed, founder of the Mosul Eye blog who reported on the atrocities carried out by IS during its three-year occupation of the city. “Al Najafi Street was destroyed by IS simply because it was the cultural heart of the city.”

Hundreds of Mosul's residents took a break from rebuilding their devastated city to attend the Nineveh Cultural Festival on 5 October. For the third consecutive year since IS were driven out of the city, filmmakers, poets and singers celebrated the cultural diversity of Nineveh province where Christians, Jews, Muslims and Yazidis have coexisted in varying degrees of harmony for over a millennium.

In April 2014 Iraqi military helicopters dropped leaflets over Mosul instructing people to stay in the city, and that they would be protected by government troops. This despite the deadly onslaught of Islamic State fighters who were capturing surrounding towns and villages at lightning speed, enslaving and killing non-Muslims on a genocidal scale.

By June that year around 1,500 IS insurgents fought off over 30,000 Iraqi police and troops who were guarding the city, burning and crucifying hundreds along the way. Half a million people fled the city. Around the same number stayed. The poets, singers and writers among them lived in constant fear of execution.

The world watched in horror after IS released videos of its members destroying priceless artefacts from the Assyrian and Hellenistic periods in Mosul's museum in February 2015, and defacing a granite Assyrian winged bull at the city's Nergal Gate.

Spirit of Mosul
For much of its 2000-year history, Mosul has been regarded as an important centre for Arabic literature, poetry and songs in the region. Literary pioneers include Ibrahim al Mausuli, a Persian poet and singer who rose to fame after fleeing to the then liberal city of Mosul in the 6th century AD. Al Mausuli is referred to in 'One Thousand and One Nights' popularized by Lawrence of Arabia who passed through the region thirteen centuries later.

The destruction of Mosul's cultural heritage has been well-documented, with UNESCO pledging to rebuild the Museum of Mosul, the Nabi Younnis Shrine, the Al Hadba Minaret.

Among those initiatives UNESCO is supporting are the literary café 'Mosul Book Forum', and La Guilde européenne du raid, a Paris-based NGO that has launched a project to help restore Mosul's reading culture.

Four thousand books were collected and then given away to passersby during the Nineveh Cultural Festival in what became the city's first book fair since the defeat of the Islamic State.

Literature and poetry enthusiasts queued up in the afternoon sunshine to have books signed by famous poets and writers, including novelist Faris al Ghalab and poets Abeer Al-Samiaie and Ahmed JarAllah.

“There were lots of kids. All of them wanted to discuss what is art, what is literature?” Fontani explains and adds, “To see a lot of people gathering together in peace, is a positive sign.”