EPA Gets 11 Drones For Monitoring 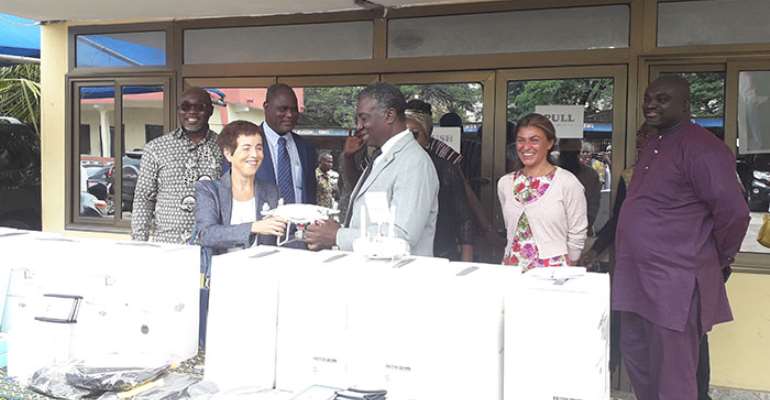 The European Union has under its Accountability, Rule of Law and Anti-Corruption Programme (ARAP) supported the Environmental Protection Agency (EPA) with 11 professional drones for the purpose of upscale in compliance monitoring.

The equipment which are to be deployed in small scale mining operations and other areas of environmental compliance such as noise pollution and oil and gas industry are to also provide additional data that are critical for effective prosecutions of environmentally related crimes.

ARAP had previously engaged the EPA in series of monitoring activities under its environmental governance project where two drones and other gadgets were provided for the piloting of Information Technology (IT) compliance monitoring tools in some mining areas that included Dunkwa Offin, Konongo among other places.

A delegation led by the Head of EU delegation in Ghana, Diana Acconcia made a presentation of the second batch of equipment to the Minister of Environment, Science, Technology and Innovation, Prof. Kwabena Frimpong-Boateng at a ceremony held in Accra on Friday October 4, 2019.

Also present was the deputy minister, Patricia Appiagyei together with officials of EPA led by Acting Executive Director, John Pwamang and a team from ARAP led by team leader, Ana Sanchez.

Ms Acconcia in her remarks indicated that transparency in the management of the environment and use of revenues from natural resources that included extractive industries of mining as well as oil and gas, has been identified as critical to the economy.

It was that reason she emphasised the need for improving accountability standards and implementing reforms that would fight corruption in areas of environment and natural resources.

She pledged the commitment of the EU in cooperating with countries like Ghana who put the Nationally Determined Contributions (NDCs) and the achievement of Paris Agreement targets at the core of their action.

“An essential component of this plan is the policy on plastic waste management which we expect a lot, given its alarming impact in Ghana’s environment” she said.

The minister, Prof Frimpong-Boateng, classified activities of humans that adversely affect the environment as acts of corruption that need to be policed by agencies and other bodies who would rely heavily on latest technologies and expertise to curb such activities.

He also expressed worry over the dire effect of climate change which has resulted in change in rainfall pattern and prolonged seasons that has either caused the drying up or flooding of water bodies, hence affecting farming activities.

“When you come down south you will witness coastal erosion as a result of rising sea levels where you have farmlands that are filled with salt therefore making it impossible to farm or graze” he said.