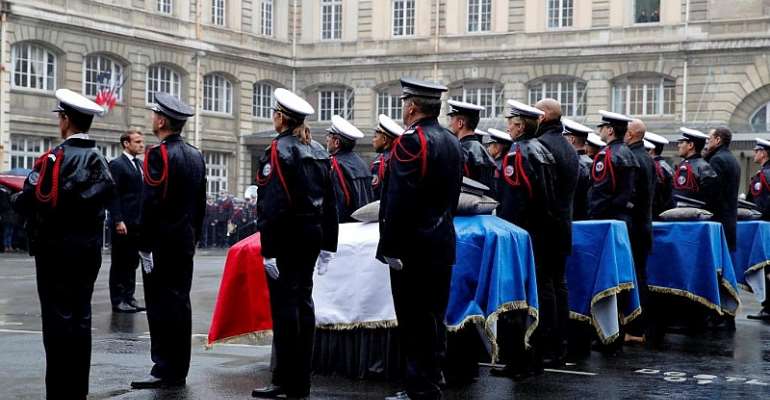 France is banning a planned demonstration that triggered outrage from politicians who saw it as honouring the attacker who killed four people in the Paris police headquarters last week.

The demonstration, in the Paris suburb of Gonesse where attacker Mickael H lived, had been planned for Thursday by Hadama Traore, who is looking to build up a profile on social media as the “political candidate of the suburbs”.

Traore condemned last week's attack on Facebook, but added he wanted the demonstration to take place as a mark of solidarity for the Gonesse community and to avoid the attack being used to discriminate against Muslim or ethnic communities.

“The demonstration planned in Gonesse in support of the Paris police murderer is an act of infamy and an insult to the memory of our police force,” Interior Minister Christophe Castaner wrote on Twitter on Wednesday, in announcing the ban.

Earlier this week, French President Emmanuel Macron called on the nation to fight terrorism on Tuesday at a ceremony in which four victims of last week's knife attack at Paris police headquarters were posthumously awarded France's highest civilian honour.

Macron led the ceremony at the police headquarters on Paris's main central island, the Ile de la Cité, where an IT specialist killed four colleagues before being shot dead last Thursday.

“We will wage an unrelenting fight in the face of Islamist terrorism,” Macron said in a speech in the presence of survivors, calling “the entire nation” to mobilise against the threat.

Macron was also to meet privately with families of the victims.

Also at the ceremony, Interior Minister Christophe Castaner bestowed France's highest civilian distinction, the Legion of Honour, to the three officers and one administrative worker who died in the attack.