I Will Collapse NPP, NDC In The Savannah Region--CPP Chairman-Elect 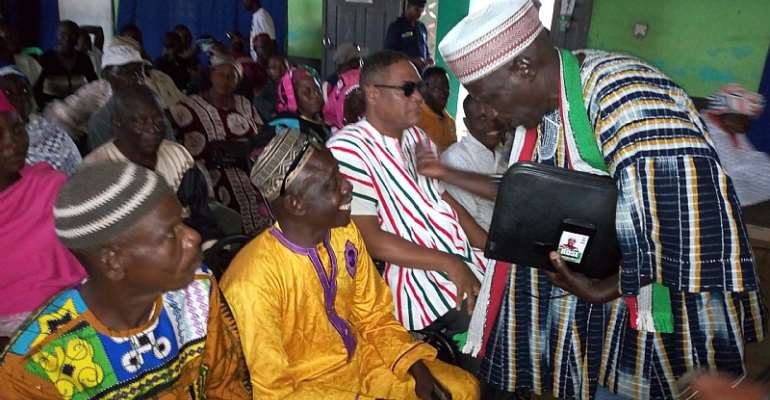 The Chairman-elect for the Convention People's Party CPP) in the Savannah Region, Mr. Alidu Mahama has promised to break through the NDC and the NPP in the region.

Speaking immediately after his swearing at the party's regional delegates Congress held in Damongo on Tuesday 8th October, 2019, Mr Alidu said he and the executives elected will work extra hard to change the mindsets of the youth who mostly believe it is only the NDC and the NPP that are the only political parties in Ghana.

He also touched on unity in the party especially the top hierarchy since the NDC and the NPP never succeeded through criticisms and therefore appealed to the national executives of the party to make sure unity and togetherness prevail at the party.

Mr. Alidu further appealed for the construction of a regional party office in the Savannah Regional capital of Damongo to enable the party ran its affairs in the region.

General Secretary of the CPP, Mr. Kobina Bonfeh a.k.a Kabila said it is a remarkable achievement for the party in conducting the 12th election in the last 11days in the country.

Mr. Kabila also talked about the CPP building an all-inclusive government that will have members of other political parties being a part of the government of the CPP.

He also said a future CPP government will reconsider the free compulsory basic education that will cover tertiary institutions such as Polytechnics, Universities and Teacher Training Colleges and further revert the Polytechnics in the country back to the core mandate they were created to undertake in the country since there is no need in converting them to universities before they function as universities.

He further said the NHIS is too narrow and limited that does not cover all ailments which the future CPP government will broaden the scope to cover all ailments with every Ghanaian getting the opportunity to access free compulsory medical checkup every year under the NHIS.

Mr. Kabila went on to say that the CPP is the only hope for Ghana since for the past 26 years Ghanaians have seen the best of the NDC and NPP hence their exit for the CPP to take over.

At the end of the election, the position of Chairman went to Mr. Mahama Alidu, the 1st Vice Chairman going to Mr. Sulemana Hamdan and the 2nd Vice Chairman position won by Albert Iddi.

All the newly elected executives went unopposed with the electoral commission supervising the entire process.