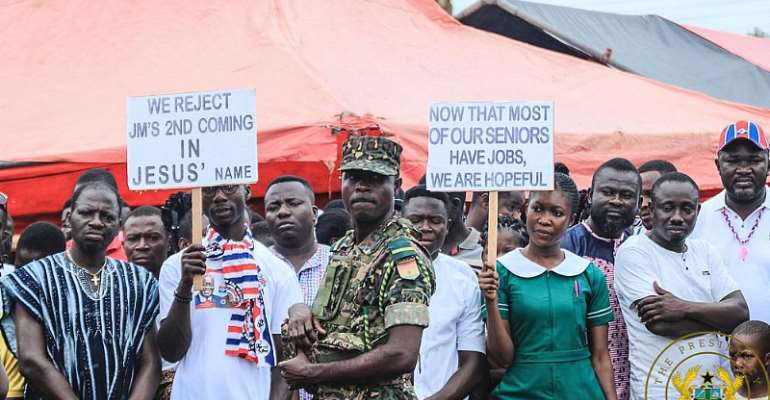 President Akufo-Addo says government through the Ministry of Transport will ensure that a modern Landing Site is constructed at the Banda side of the Bui Dam as originally planned as part of the Bui Hydro-power project.

The President wondered why the Landing site for Banda, which was part of the design of the Bui Dam project, was relocated by the previous NDC government to a different town instead of going by the original plan.

The President was addressing a durbar of chiefs and people of Banda at Banda Ahenkro in the Banda District to round-off his two-day tour of the Bono region.

As part of the tour, the President interacted with all manner of people – chiefs, students, community members, etc – and also inspected work on several infrastructural projects in Sunyani and other parts of the region.

Among them is the much talked about New Dormaa road project, the rehabilitation of the Sunyani Airport and the construction of a multi-purpose Youth Development Centre at Dormaa Ahenkro, among several others.

President Akufo-Addo thanked the chiefs and people of Banda for acknowledging the positive impact of the numerous social interventions by his government as assured them of more of such interventions.

The Minister for Special Development Initiatives, Hawa Koomson said some of the ambulances procured under the One-Constituency, One-Ambulance policy by government have already arrived and parked in front of Parliament House while the remaining will soon arrive for distribution to every constituency.

According to her a total of 307 ambulances are being procured under the policy while her ministry is in the process of providing 10,000 hospital beds for distribution to various public health facilities across the country.

Nana Kwansiafam Anim Kofi Hantali, the Abremponhene of Banda Traditional Council, did not mince words about the positive impact of the various initiatives of the government on the lives of the people.

He called on the government to consider the setting-up of Cashew Processing factory in the area since majority of farmers there are into cashew production.

Earlier at Sampa, the Acting President of the Sampa Traditional Area, Nana Kwadwo Magsah II, said the President oAkufo-Addo, deserves a second term in office, following the good work his government has undertaken since assuming office in January 2017.

Speaking on Tuesday, 8th October, 2019, when a durbar of Chiefs was held in honour of President Akufo-Addo, the Sampa Chief noted that, in every facet of national life and in every sector, the developmental achievemnts of the Akufo-Addo government can also be seen in Sampa.

“We thank you for the creation of the Bono Region, for which our MP, Hon. Siaka Stevens, has become deputy Minister. You have not forgotten us in Jaman North, and we have gotten our fair share of development,” he said.

The Sampa Chief continued, “We cannot forget the water project, and the Jaman District Government Hospital for which a facility has been sought fot the expansion and rehabilitation of the hospital.”

Whilst thanking the President for employing youths resident in Sampa under the Nation Builders Corps initiative (NABCO), he also noted that 10 Arabic teachers have been employed under the Zongo Development Fund.

Additionally, and with the security challenges in the locality, the President noted that police and military officers have been given two vehicles to enable them do their work.

With several requests made for the construction of Sampa town roads since independence, all to no avail, Nana Kwadwo Magsah II stated that “your government in two and a half years has proven to be a promise-keeper. You have started the construction of our town roads, and we are grateful.”

On his part, the President was happy to learn that “you are getting your fair share of the national cake, in terms of access to education, healthcare, agriculture, and security.”

Whilst thanking the Sampa Chief for his “2nd term prophesy”, President Akufo-Addo stated that the request for a future training college, a girls hostel for the nursing training college and a satellite campus for the University of Energy and Natural Resources will be looked into, and addressed.

“The purpose of my visits is to listen at firsthand the concerns of the people. I don’t have to rely, all the time, on information delivered to me. I have to travel around the country to see at firsthand things for myself. So, any time you hear I have left Jubilee House on a tour of regions in the country, it is to afford me the opportunity to interact with you and address your concerns,” he added.

Arrest Any Chief Involved In Galamsey - NPP Communicator
2 minutes ago