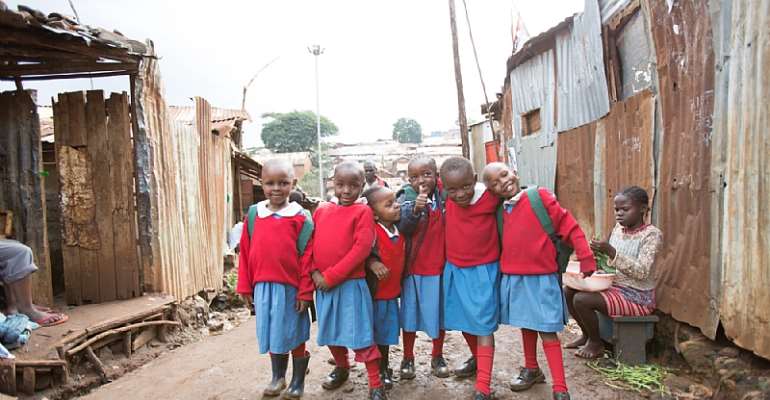 A new global forum designed to tackle world poverty is reversing the usual power dynamics of development conferences by holding its inaugural event at the Shofco School for Girls in Kibera, Africa’s largest slum community.

Founded by Kennedy Odede, one of Africa’s best-known social entrepreneurs, The inaugural World Poverty Forum (WPF), taking place on the 11th and 12th of January 2020, is that rare example of a conference choosing its location in order to give a real voice to the poorest so they can co-create solutions to their own problems.

WPF will be one of the first events in a united 2020 plan announced during UNGA week to respond to the urgent need to accelerate concrete progress towards meeting the sustainable development goals in 2020 and beyond.

Kennedy Odede , who also founded Shofco, a catalyst for transforming conditions in urban slums, said “It is sometimes forgotten that any programme to improve lives can only be successful it if works with the grain of individuals – and the bundles of talent, hope and fear that make up their unique experiences. We will bring leaders to a place where they can feel both the unforgiving reality of poverty alongside the hope that an institution like Shofco can create.

“The World Poverty Forum will spark new ideas through worlds colliding, bringing together leading politicians, CEOs, NGOs, entrepreneurs and thinkers, with those who are delivering solutions on the front line of global poverty. This will be a fearless debate happening in the thick of the community together with the people we seek to help – rather than in a western five star hotel. We want to reverse the usual power dynamics of development conferences and release the energies that genuine collaboration can bring”.

The full two-day programme will bring a holistic approach to its discussion, focussing on practical solutions; knowing that now, more than ever, there is an interconnectedness to all the challenges – from health and education to conflict and climate change - that keep people entrenched in poverty. The forum will include ‘Learning Journeys’, where delegates will visit real projects in Kibera as well as ‘Hacking Poverty’ disruptor seminars that look for simple solutions to everyday hardships.

The forum will celebrate pioneers in the global fight against poverty - from individuals and tech start ups to NGOs and corporations - with the launch of the first Kibera Awards. The forum will also launch a new Global Alliance for the Poor that will create a platform for leaders from different disciplines to help transform slum communities by working directly with the people who live in them.

WPF will hire local photographers, video crews, caterers and musicians. The contributions of their talents, voice and spirit to the forum will be a powerful reminder to delegates that there are rich pools of skill, flair and inventiveness in the world’s poorest communities.

Nearly 600 million people - 8% of the world’s population - live in extreme poverty – defined as earning less than $1.90 a day. While many regions are making good progress with poverty reduction, almost all of Africa, especially sub-Saharan Africa, is off-track for ending extreme poverty. It is predicted 13 African countries will see an increase in the absolute numbers of extreme poor between now and 2030.

More than 1.3 billion people across the globe are described as “multidimensionally poor”, a category which is defined by ways in which people experience deprivation beyond their income, such as health, education and the standard of living.

"This will be a Davos for the poor. By spending a few days with the people that live in Kibera, delegates will get some insight into the complex lives in front of them. Crucially, the fact that WPF is taking place in a girls school in the heart of Africa's largest slum means that it will shine a much needed light on how to transform education where it is most needed. It will allow delegates to walk the same school corridors, breathe the same air, and taste the hopes, dreams and disappointments of the young girls in Kibera in a way they would never do by watching to a slick multi-media presentation or listening to a panel discussion in an airless boardroom. WPF will have a focus on education in emergency settings, whether down to conflict, refugee movements or natural disasters. This is a new way to have this discussion and it couldn’t be more timely".

Kennedy Odede, added:
“There is an urgent need for a fresh approach to lifting up the world’s poorest as recent progress has been slow, patchy and unstable. 2020 marks a third of the way through the SDGs and there are now ten years to go. It is a make or break year.

“The challenge of tackling poverty is not simply leaving the global economy on autopilot and watching as it inexorably raises people out of extreme poverty. It requires policy-makers to be deft, and understand the new threats around them, from climate change to the global refugee crisis to the rise of populism. At the same time, the whirlwind that automation will wreak on developing and emerging economies is only now being understood.

“Global poverty remains the biggest scar on the world’s conscience, and the communities it blights need our attention like never before.”