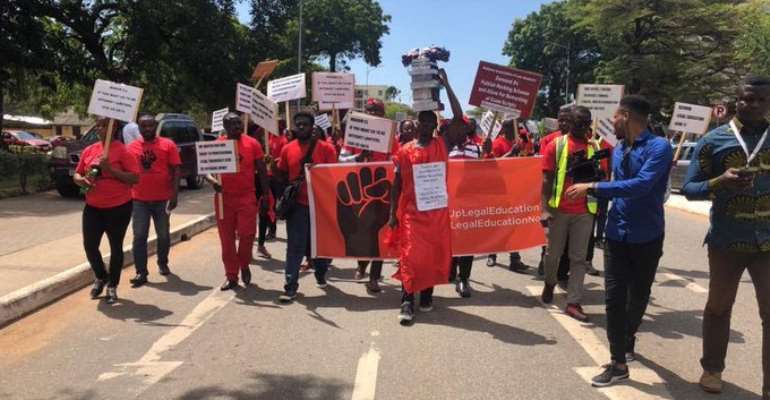 Does the poor handling of the law students' demonstration presage how things will be under the now confirmed Inspector General of Police (IGP)? We pray not.

The manner in which law enforcement agents responded to the demonstration on Monday was to say the least below international best practices, notwithstanding the breaches.

Professional policing does not include the colonial day escort police responses derogatively known as 'bugabuga' in Hausa, to wit 'beating' or put alternatively 'brawn policing.' We are neither in Sudan nor any of the democracy-deficient countries where brawn policing is a feature of law enforcement.

Law enforcement officers should understand what the hazards of their industry entail and tune their minds to that reality. We are constrained to suggest the inclusion of human rights in the training manual of police officers across the country.

Their lives were threatened to warrant to the brutish action they exhibited in full glare of the public.

We are constrained to ask the new IGP whether in his opinion this is the way to go in managing such expected reactions by aggrieved segments of the population.

To think that the chief constable is a lawyer and should, therefore, appreciate the importance of human rights even while enforcing the law beats us.

His obvious understanding of the predicament of the aggrieved law students adds to our amazement at the response of his officers. The signs of a good play can be determined in the early hours of dawn.

We have seen his rich CV but such colourful footnotes do not always suggest good performance. Perhaps he is yet to stamp his authority as he steps into the helm. His expected movement of commanders and other subordinates as part of stamping his authority and hint of his leadership direction is yet to be seen

He should read his orders to the commanders as soon as possible otherwise we would be constrained to attribute any brutal response from his officers to him as we are currently doing.

We have taken note of the New Patriotic Party's (NPP) textual reaction to the brutish response and cannot but conclude that it could not have been better put.

We expect to see a pronounced disparity between NDC-card bearing police officers' handling of demonstrations from that by professional and apolitical officers. In the case of the former, eyes are lost and in spite of the reality of the loss party operatives somewhat glorify the brutishness of the cops.

Under the new political dispensation, professionalism is all we ask for. The new IGP should strive to do just that otherwise the difference between him and others before him would hardly be noticed.

The response to the demonstration was as barbaric as it was inappropriate in a political dispensation whose leader is acclaimed for his deference for human rights and decency.

President Akufo-Addo saw action in the 'kume preko' demonstration and understands what bad policing is. He would definitely not shower plaudits on perpetrators of such savagery.