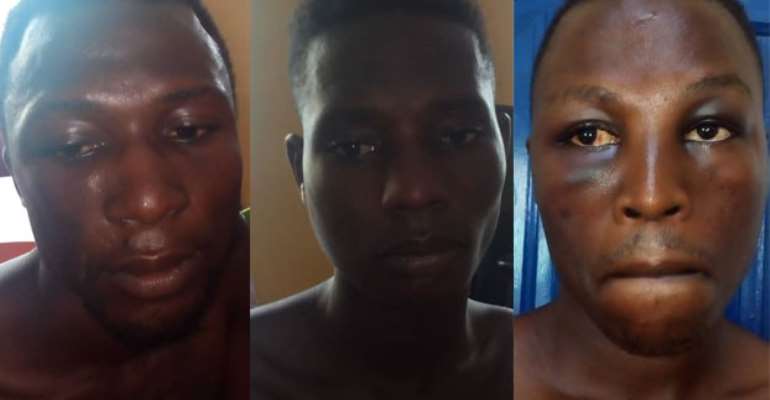 Three suspected armed robbers believed to be part of a gang of five that attacked a family at Oyarifa, near Adenta, have been picked up by the Adenta Divisional Police Command.

The two other suspects (names withheld), who are currently at large, are being hunted for by the police.

He confirmed that the complainants reported to the Ayimensah police that on that fateful day, around 2 am, five men armed with guns and machetes and wearing facial masks broke into their house to attack them.

The couple said the men used cement blocks to break into their door to gain access to the rooms and attacked them. They took away the wedding ring of the woman, their iphone SX mobile phone, some unspecified items and cash of GH¢850, and bolted afterward.

On October 5, 2019, the Adenta Divisional Police Commander said police intelligence report revealed that the suspected armed robbers who attacked the couple were hiding at Ashaiman.

“With the assistance of the Ashaiman police, the three suspected armed robbers were grabbed from their various locations, but one of them managed to escape arrest,” he disclosed.

“We are still investigating them and will soon put the three before court, but efforts are being made to grab the other two,” he added.