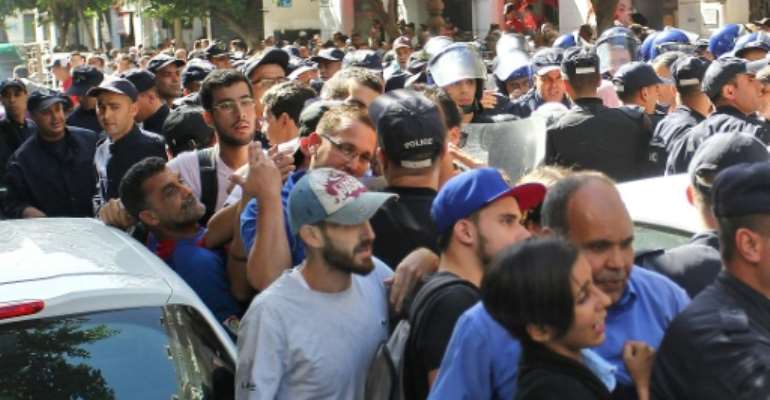 Algerian police officers confront protesters during an anti-government demonstration in the capital Algiers. By STRINGER (AFP)

Algerian police Tuesday prevented a weekly protest by students in the capital for the first time since an anti-regime movement took to the streets in February, AFP journalists and witnesses said.

They forcefully barred access to a square in central Algiers and managed to disperse the demonstrators after several forays, making at least 14 arrests, an action group for the release of detainees said.

"Police brutality reached a level not seen since the start of the demonstrations, according to several students", El-Watan newspaper wrote on its website.

The prevention of the student march -- a rally that takes place each Tuesday -- follows a wave of arrests of journalists, activists and figures opposed to a December 12 presidential vote to replace longtime leader Abdelaziz Bouteflika who resigned in April after mass protests.

Security forces have toughened their line against protests -- including much larger rallies held each Friday, extending well beyond the student community -- since the election date was confirmed in a mid-September announcement.

Protesters have been demanding political reforms and the removal of regime insiders -- including Gaid Salah himself -- before any vote.