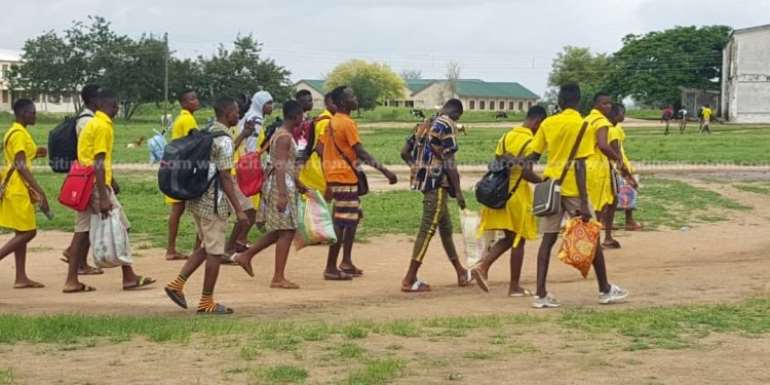 The Builsa South District Security Committee (DISEC) has closed down the Fumbisi Senior High School in the Upper East Region over an alleged spiritual attack on some students.

A female student (Salomey Akambog) on Sunday night, 6th October 2019 was alleged to have fallen from the first floor of the school’s dormitory block after a hot chase by an alleged spirit (ghost) from her

school.
“On Sunday, 6th October, 2019 at about 10pm, a female student claimed somebody appeared before her but in an attempt to identify the person she entertained fears and shouted and then in the process, was thrown down the ground floor. So, her colleagues got wind of the information and together with some teachers rushed her to the Sandema district hospital where she was reported to have lost their sight.”

The DCE said eight(8) girls also collapsed in the process and were rushed to the Sandema hospital for treatment and were subsequently discharged.

He said another incident happened when a male students took advantage of the girls' situation and started attacking some teachers and even vandalized the senior housemistress residence.

“Later on the afternoon of Monday (7th October,2019), we got information that, some of the girls were collapsing and being rushed to the Sandema hospital”.

“Two critical issues led to the closure of the school–one was the insecurity in the school because we had information that, some students were planning to attack some teachers and vandalize school properties in the night and the other one was when female students started collapsing on Monday afternoon. There was the need to close down the school for DISEC to plan properly and recall them. The school has been closed down and DISEC and the school authorities will be meeting to look at how to sanitize the environment and recall the students back to school. So, we are hoping that, somewhere next week we will recall them back to school,” he added.

Meanwhile, Mr. Gariba has directed that, the affected female student, Salomey Akambog who lost her