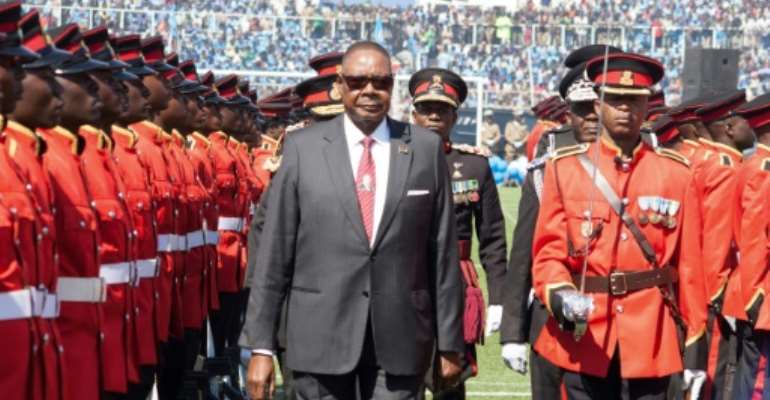 Malawi has been rocked by protests since a disputed May election that saw President Peter Mutharika elected to a second term. By AMOS GUMULIRA (AFP/File)

A policeman was stoned to death Tuesday in Malawi during clashes between pro- and anti-government protesters ahead of President Peter Mutharika's first public meeting since a disputed election, police said.

A wave of protests over the May poll has gripped Malawi since May and Msundwe -- a trading outpost west of the capital -- has been a hotbed of demonstrations.

"We have lost a police officer," police spokesman James Kadadzera told AFP, adding that Superintendent Usumani Imedi had been stoned to death and "killed by rioters and criminals this morning."

Anti-government protesters had blocked the main road in Msundwe to stop supporters of the ruling Democratic Progressive Party from travelling to Mutharika's first rally in the city since his poll win.

An eyewitness told AFP police fired teargas to disperse the protests but demonstrators "kept regrouping and they fought back with stones."

"In the ensuing chaos, they cornered one policeman whom they stoned to death," Ulemu Phiri, who witnessed the chaotic scenes said.

So far 12 people have been arrested accused of breaching the peace.

Homeland Security Minister Nicholas Dausi said some of the protesters had put up a roadblock, throwing stones and injuring people.

"Other road users called the police to come and rescue them. When the police arrived, they started stoning them to the extent that we have lost one police officer," Dausi said.

Imedi is the second policeman to die since protests have rocked Malawi.

Security expert and retired brigadier Marcel Chirwa accused the police of getting embroiled in politics and applying strong arm tactics.

At a rally in the city of Lilongwe, the stronghold of the country's largest opposition, the Malawi Congress Party, Mutharika stuck a conciliatory tone, urging the country to unite.

"This is our country. Let's not burn it down," Mutharika said.