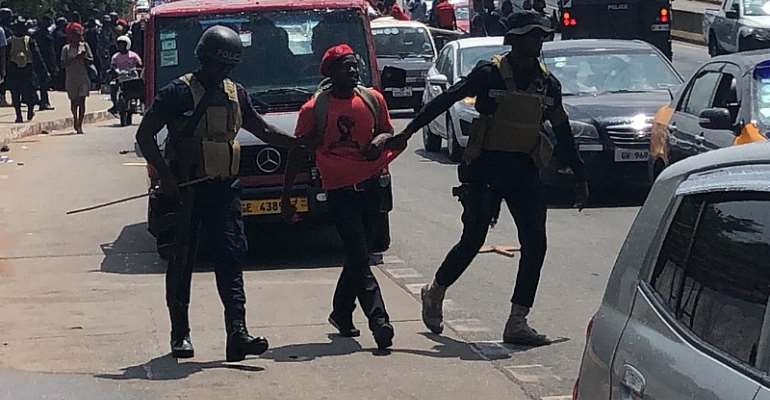 The National Youth Authority (NYA) has lambasted the Ghana Police rough treatment meted out to some law students who demonstrated on Monday.

The law students and their hundreds of sympathizers intended to march to the presidency in a peaceful protest dubbed '#OpenUpLegalEducation' to push for reforms to open up legal education in the country.

This, however, turned violent after the police allegedly attacked the demonstrators with water cannons and rubber bullets, with the aim of disrupting the protest, over claims that it was an illegal one.

The NYA which is aimed at supporting the welfare of the youth in the country also assured the students of engaging with all key stakeholders to create a solution to this problem.

They made this known in a statement signed by the Chief Executive Officer of the Authority, Sylvester Tetteh.

The National Youth Authority (NYA) condemns without reservation the brutalities meted out by the police to some law students who were embarking on a peaceful demonstration against the recent mass failure recorded in the entrance exams to the Ghana School of Law among other concerns, and demands for immediate reforms to legal education in the country.

As the statutory body charged with the mandate of championing the welfare of the youth of the country, the NYA finds the conduct of the police to these innocent young people who were only engaged in a democratic exercise in pursuit of their educational rights as most unfortunate. Democratic policing demands that even if the students had defied the rules of engagement, the police ought to act professionally to bringing them to order rather than resorting to brutal force on unarmed and non-violent protestors.

The Authority is hereby imploring our able-bodied security officials to exercise restraint, decorum and abide by the professional code of conduct governing the police service. And to the disgruntled youth, we say, the NYA shares in your concerns but pleads with you to calm down as the authorities take steps to address your legitimate concerns. It cannot be emphasized that legal education needs some drastic reforms to respond to the exigencies of time.

The NYA wishes to assure the youth of Ghana particularly the demonstrating students that it has taken significant interest in this matter, and shall soon engage all the relevant stakeholders to explore ways of finding lasting solutions to this systemic problem that continues to plaque legal education in the country.

The New Patriotic Party (NPP) has called for a probe into the reported use of excessive force by police during the protest by the law students.

Though the police have justified the use of force against the students, the NPP insisted in a statement that such measures were uncalled for.

Meanwhile, the Ghana Bar Association (GBA) has called for calm among agitated law students pushing for reforms in the country's legal education system, and has pledged to help solve their problems.

FixingTheCountry Movement to march in support of Akufo-Addo'...
52 minutes ago