Is The Anti-Galamsey Glass Half-Full Or Half-Empty? 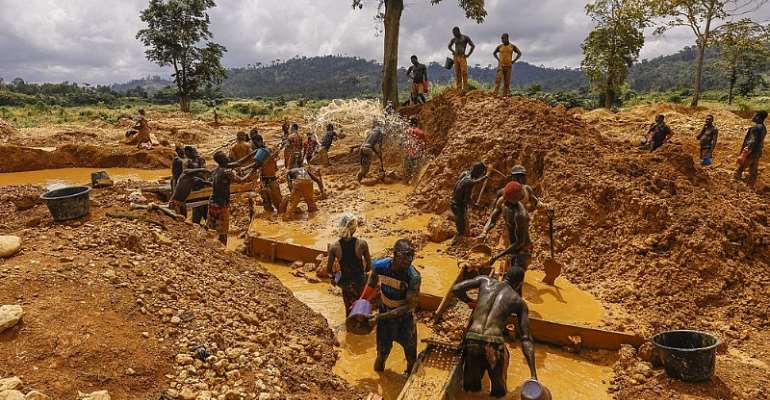 There have been many comments on Ghana’s anti-galamsey struggle in recent days.

Of the comments, the most biting have been those directed at President Nana Addo Dankwa Akufo-Addo, for admitting at a public meeting at Rutgers University, in the USA, in September 2019, that his Government made a ”mistake” when it stopped the prosecution of the Chinese galamsey “queen” Aisha Huang, and deporting her.

My own view is that the President defined himself as a “big” person when he was man enough to admit in public that the Government of which is head, had made a “mistake”. The President knew his opponents would seize upon the admission to criticize or embarrass him. Yet he did not flinch from making it. That's what I call political courage.

An additional reason why I think it was useful for the President to admit the mistake is this: it will – or should -- send a message to his counterpart in China, President Xi Jinping, that the involvement of Chinese nationals in galamsey in Ghana, is the source of embarrassment to his friend, President Akufo-Addo and his Government, on a daily basis.

I don’t think that this embarrassment will please the Chinese President, for when President Akufo-Addo visited China in September 2018, he [Akufo-Addo] reported to the Ghanaian community in China that he had QUOTE “been able to hold frank discussions with Chinese President Xi Jinping on the matter. ..’and that he [President Xi Jinping] himself was the first to recognize that Ghanaians have every right to deal with people who are involved in illegal activities....I was very happy about the manner in which he [Xi Jinping] responded and the assurance that he gave that those of his compatriots who were engaged in illegal mining activities will not find any support from his government”. UNQUOTE

Did President Akufo-Addo misapprehend the position of President Xi Jinpin? I doubt it, for leaders whose countries have friendly relations with each other, do not mislead each other. And Ghana’s friendly relations with China date back to a period exceeding 60 years. I know it, for I was personally, a beneficiary of that friendship, having been the fraternal guest of the Chinese Writers Union as long ago as 1958.

I want the friendship between our two peoples to continue to exist eternally, and that’s why I’ve been cautioning China to view the Ghanaian galamsey operators who import Chinese nationals to come and help them, in the same light as it regards the unpatriotic Chinese who worked against the interests of the Chinese people, during the Opium War and other sad periods of Chinese history. Quislings and other nation-wreckers are not unknown to the Chinese Government: the Chinese people’s glorious revolution has had to combat imperialist agents and home-grown “anti-people” elements, ever since the People’s Republic was proclaimed in 1949. (Some of these malefactors were motivated by the desire to acquire wealth – just as our galamseyers are seduced by money in Ghana.)

To me, therefore, it is disingenuous for any Chinese official to pretend that just because there are corrupt or ignorant officials and greedy law-breakers in Ghana – who facilitate the granting of visas to Chinese nationals, and also, because there are Ghanaian galamseyers who “show the Chinese where Ghana’s gold is” – the Chinese Government can wash its hands of its duty to view the long-term interests of Ghana in the same light as it views China’s own long-term interests.

After all, was it not Chinese analysts who objectively dissected the world situation and came to the conclusion, expressed in colourful language, that the “imperialists” were “paper tigers”?

Isn’t China’s growth in strength over the past 70 years (achieved in the teeth of constant subversion by some of the Western countries) proof that China’s analysis of its own future prospects, was correct?

Was it not Chinese economic planners who foresaw the crucial role that a railway line between landlocked Zambia and Tanzania, could play in the economic and social development of Central and East Africa, and got the Chinese Government to make the enormous sacrifices [$2.2 billion US in today’s money at a time that China was not as prosperous as now!) that enabled China to build the “Tazara Railway” (nearly 1,200 miles long) for Africans who lived far away from China?

I hope the Chinese Government will appreciate the duty it owes to the people of both Ghana and China to help end galamsey. Indeed, I wish the President of Ghana would invite President Xi Jinpin to make a return visit to Ghana! We should take him to such rivers as the Ankobra and the “sacred” Tanoh, and subtly remind him that if the Yangtze River had been allowed to become as turbid as Ghana's rivers have become today (due to galamsey) Chairman Mao Zedong would never have been tempted to make his historic swim in the Yangtze River in 1966, which yielded the iconic photograph reproduced on this page.

The Chinese love and revere their Rivers, just as Ghanaians like me harbour affection towards our own Rivers. We therefore need to work TOGETHER to protect Ghana's Rivers for future generations.

In making this appeal to China, I am in no way absolving the Ghana Government of its own sworn duty to end galamsey and resuscitate our Rivers, streams and water-bodies.

Now, because GALAMSTOP, the Ghana Government's programme to end galamsey, has met with quite serious challenges, some people want it to be scrapped altogether. But isn't that a curious way of thinking? When challenges arise on the battle-front, it is the duty of a fighting unit to meet them head-one, not turn tail and run.

What our people have to fully appreciate is that galamsey means MONEY, and wherever money comes into play, there will be betrayal, contradictions, the unethical exertion of influence, and downright corruption. But if the GALAMSTOP glass is half-empty (to return to the metaphor with which I began this article) the logical thing to do is to try and REFILL it, not to break the glass altogether,

Assuming the critics' motives are pure, of course. For unfortunately, many of those targeting GALAMSTOP are doing it to score political points, or because they haven't taken the trouble to fully understand how complex the whole galamsey issue is, especially only one year to our elections. On behalf of our children's children and their children, I urge these prophets of doom to “cease and and desist” forthwith!

I also urge our Government – and Parliament – to continue to show unity over the galamsey issue. I salute them for the shrewd way in they enacted the Minerals and Mining (Amendment) Act 2019. We need more of the spirit shown in securing that particular piece of legislation.

Meanwhile, my heartfelt felicitations to the Government and People of China, on the 70th anniversary of their glorious October Revolution, which occurred on 1 October 2019.