Professor Richard Akindele was convicted in December 2018. He is now serving 2 years in jail after being convicted for demanding gratification and sexual coercion in exchange for grades from a master's student at the Obafemi Awolowo University (OAU) in southwest Nigeria. His conviction came after a CNN Africa interview in June 2018 with 23-year-old Monica Osagie who had secretly taped a phone conversation with Akindele to gather evidence against him. 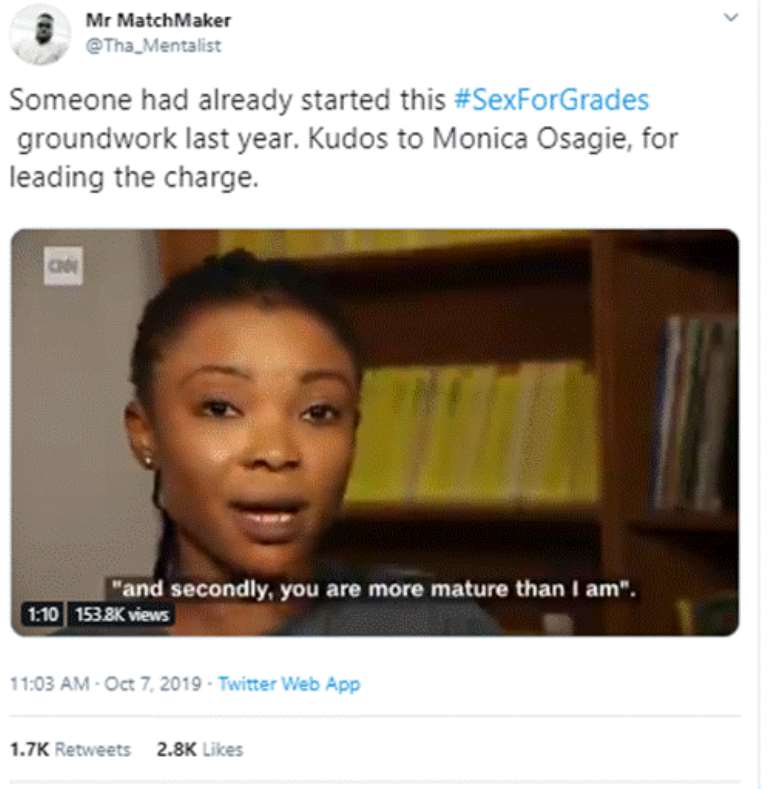 The CNN Africa interview and evidence against him led to his dismissal by the governing council of the university and an investigation by the Nigerian Senate into the issue of sexual harassment in universities. It also led to criminal proceedings by Nigeria's anti-corruption agency, ICPC which led to his conviction.

One year + after... The Bukola Saraki led Nigerian senate which passed a motion that it would investigate the increase in rape and sexual assault across the country has been replaced with new leadership after an election year without making any substantial headway into protecting “women, children and vulnerable people across the country’ like the motion put forth by former Deputy Majority Leader, Senator Bala Ibn Na'Allah (Kebbi South) had said after the social media uproar over Monica’s case. The Tertiary Education Sexual Harassment Bill got to the second reading but lecturers represented by members of the Academic Staff Union of Universities (ASUU) were vehemently against the passing of the bill. 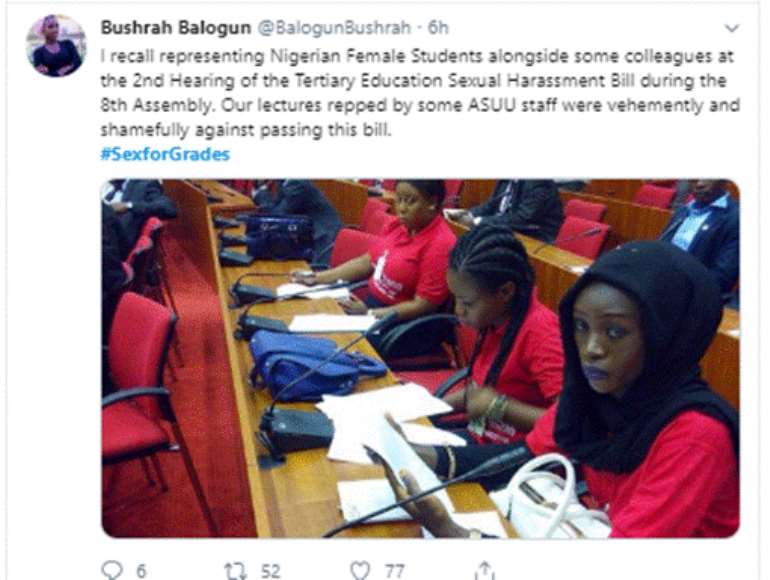 #SexforGrades and the Cold Room It’s been over a year after and another International media platform, BBC Africa has released a special documentary titled “ Sex for Grades ” championed by Kiki Mordi, a BBC Africa Eye reporter and a 2016 winner of the Nigerian Broadcasters Merit Award for Outstanding Radio Program Presenter- South-South.

In the documentary, Kiki and her team visit two of West Africa’s most prestigious universities, the University of Lagos and the University of Ghana to prove allegations of sexual harassment by lecturers. The BBC Africa reporters posed as students and gathered dozens of testimonies.

The daring female reporters were propositioned and sexually harassed by senior lecturers of both institutions while wearing secret cameras.

The 53-minute special which follows the investigation process, taped meetings with lecturers was released on October 7th, 2019 exposing a UNILAG senior lecturer, Faculty of Arts, who doubles as the head pastor in Foursquare Gospel Church in Lagos, Dr. Boniface Igbeneghu. It also exposes Samuel Oladipo of the Economics department of the University of Lagos who takes an undercover Kiki into a perverse sanctuary called the COLD ROOM originally for meetings and seminars in the UNILAG Senior Staff club but had been turned into an entertainment room with disco lights and loud music. In the video, other lecturers whose faces are blurred are seen dancing with young girls who may have been lured with the sex for grades offer.

The lecturers from the University of Ghana exposed are Dr Paul Kwame Butakor and Prof. Ransford Gyampo. Prof. Ransford Gyampo responding to the allegations has said he would institute legal proceedings against the BBC as it is a clear case of defamation. In his words talking to Ghanaian radio station City FM, he said “ In my initial response to the BBC, I told them that I will leave the matter to God and to their conscience but my lawyers insist that we must teach them a lesson, so tomorrow Tuesday, October 8 morning, they [BBC] will see our defamation suit against them.”

How have the Universities responded? University of Lagos after an emergency meeting suspended Dr. Boniface Igbeneghu barring him from the university premises and announcing that they had shut down the cold room which was originally meant as a functions room. They also assured members of the public that any other lecturers named in the BBC investigation would be suspended immediately. 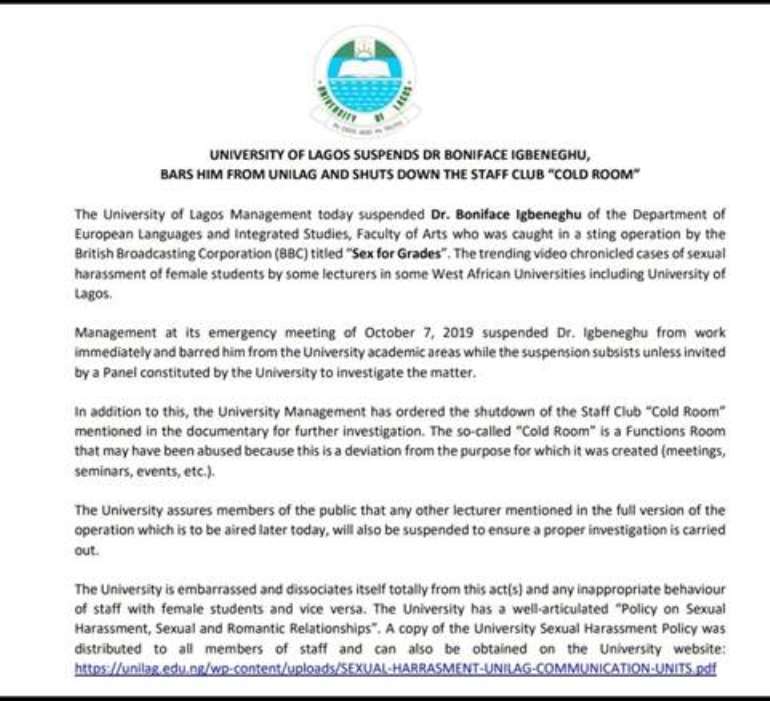 How are Nigerians and Ghanaians responding? As at 8 am on Monday, October 7 2019, #SexForGrades was trending at number 1 in Nigeria and Ghana with over 40,000 tweets with multiple chilly stories about the behavior of lecturers in universities across both countries. 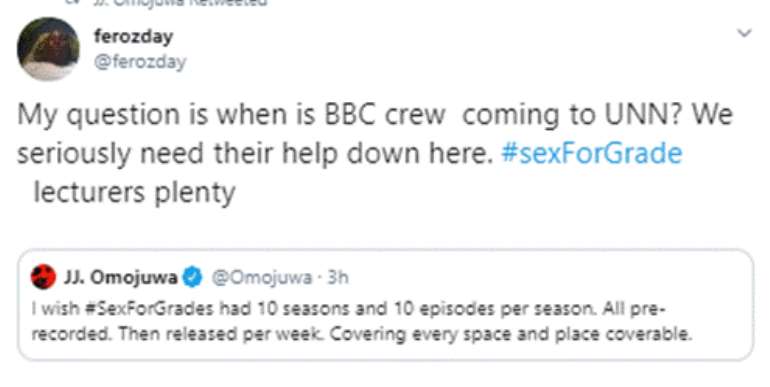 The Foursquare Bible Church has responded by suspending Dr Boniface Igbeneghu from his pastoral role. 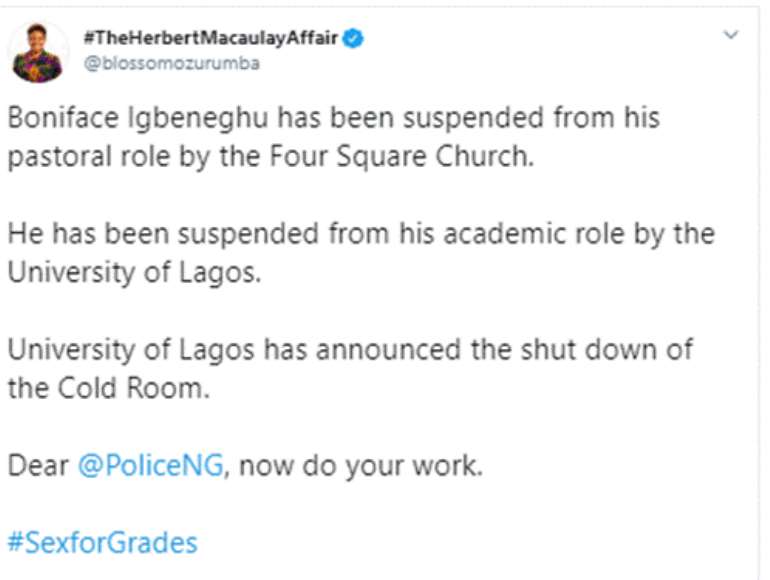 House of Representatives member Akin Alabi says any lecturer implicated in the documentary should be sacked, arrested and jailed.

Former Senate President Bukola Saraki also reacted to the documentary. He said “As a father, I’m appalled by the actions of the lecturers in the #SexForGrades expose. He also went on to ask the current senate to revisit the Tertiary Education Sexual Harassment Bill. 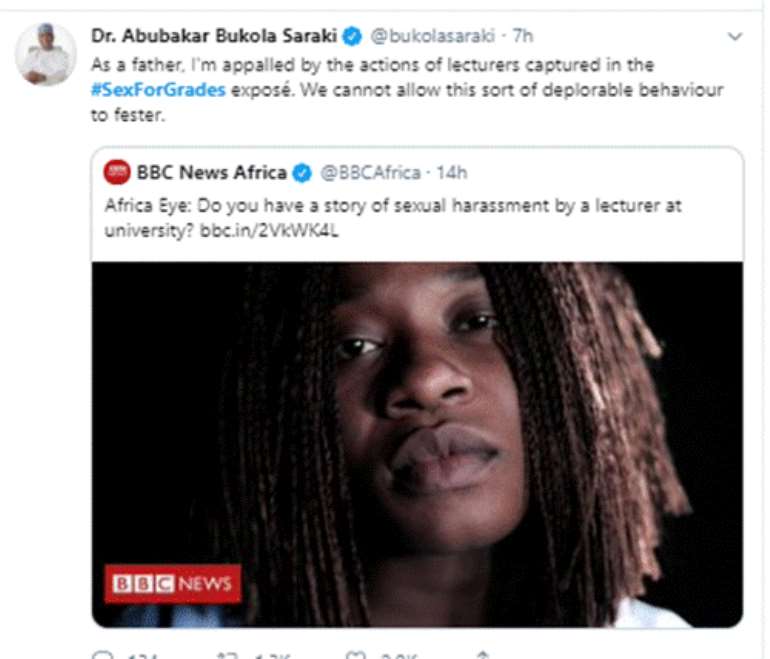 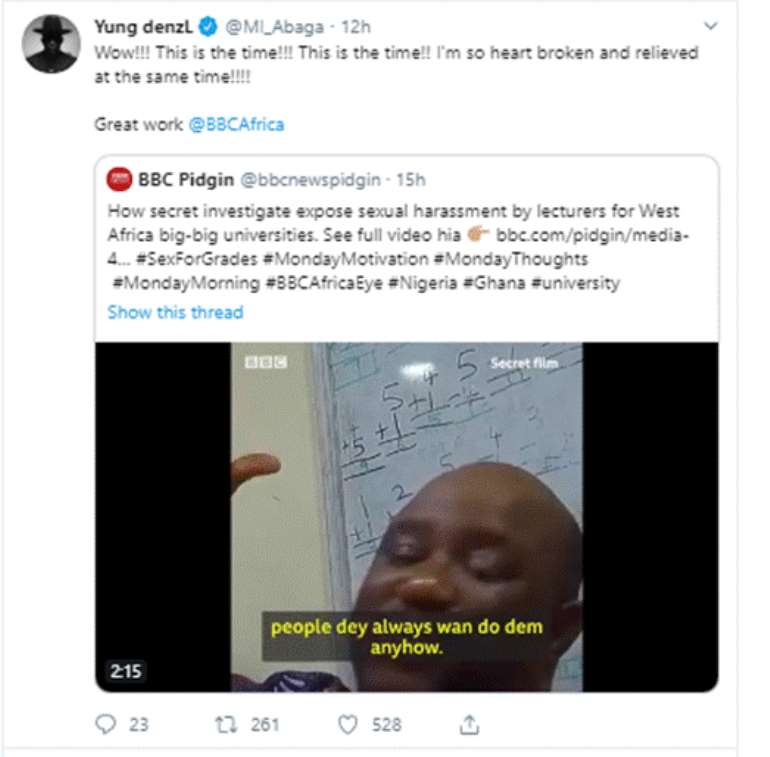 Nollywood actor Yul Edochie believes the same torch needs to be shone on sex for roles in Nollywood and other industries in Nigeria.

What is the solution to the #SexForGrades menace?

“A university is a citadel of learning, not a brothel of Gomorrah. We cannot afford a university that is the Ivy League of iniquitous perversions and fetid degeneracies. That's the flavor of the university we do not need. That's the typology of lecturers we do not want.

The solution is to send a ‘molestation EFCC’ to all campuses. Criminalize all appearances of molestation. Make the penalties so 'hell' no one dares’.

The Nigerian government is yet to respond at any level. The first level response should be to condemn the behavior by lecturers across the country and to launch a wide-scale inquiry by the Independent Corrupt Practices Commission. This inquiry should lead to more convictions like Professor Richard Akindele.

The Tertiary Education Sexual Harassment Bill should also be brought before the 9th senate and this time successfully legislated on and passed.

In passing this law, an example provided by Chile’s Senate which passed a similar bill in August 2019 requiring state-supported institutions of higher education to create detailed protocols to respond to sexual harassment. Under the law, universities would have to adopt a concrete definition of harassment and establish consistent punishments for harassers or risk losing state accreditation and funding. A study carried out in 2017 in Chile by Chile’s National Commission for Scientific and Technological Research found that at least 39% of students and 41% of academics reported encountering unsolicited attention of a sexual nature.

Looking at how the United States of America handles it, The Department of Education’s Office for Civil Rights (OCR) is the federal office charged with upholding Title IX of the Education Amendments Act of 1972.

Title IX states that: No person in the United States shall, on the basis of sex, be excluded from participation in, be denied the benefits of, or be subjected to discrimination under any education program or activity receiving Federal financial assistance.

In implementing this Law, the OCR says an institution’s sexual harassment grievance procedures must be “prompt and equitable.” An adequate policy must include the following:

● Give notice to students, faculty, and staff of the procedure and where complaints may be filed;

● Supply information about how procedures will be carried out when the sexual harassment involves employees, other students, or third parties;

● Provide an adequate, reliable, and impartial investigation of the complaint, with the opportunity to present witnesses and other evidence;

● Plan a response within a reasonable amount of time, give notice to all parties about the outcome of the complaint; and

● Take steps to prevent recurrence of any harassment and to correct its discriminatory effects on the complainant and others, if appropriate

In conclusion, while we praise the expert work of CNN, Kiki Mordi, BBC and everyone that has been involved in bringing these issues to the fore, the question must be asked about what the West African media does when it hears about these sorts of cases. Will we continue to wait for western media to root out the problems in our own society?

Is funding the problem? Joey Akan, a journalist who recently published an article for the New York Times seems to think so. He says “Media houses are broke and can’t afford or pay for anything beyond fluff pieces and content farming. Are there Nigerians willing to do the work? Yes. Foreign media houses have money” 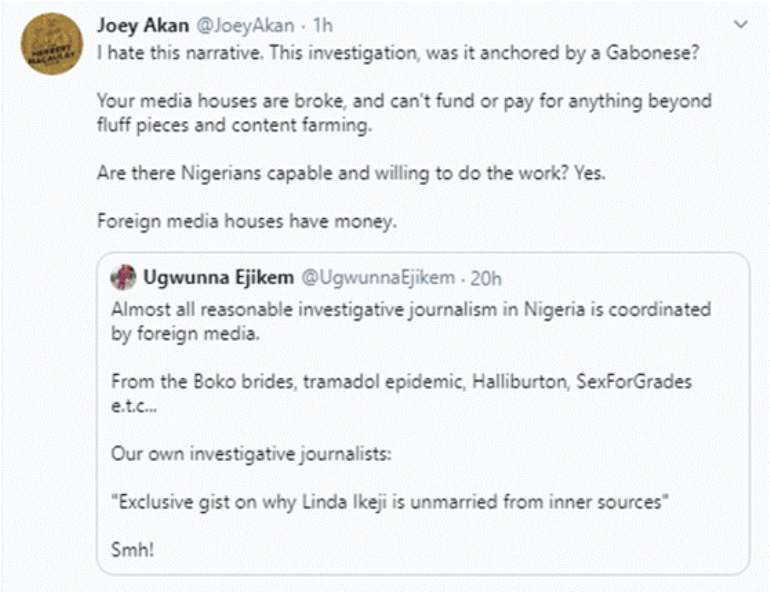 Ronke says “Money is power, Branding is power and the BBC simply has both.

There are so many talented Nigerian journalists who work for Nigerian outlets who just don't get the funding and capital they need to take stories like this further.

(Brown envelope funding is not sustainable)”.