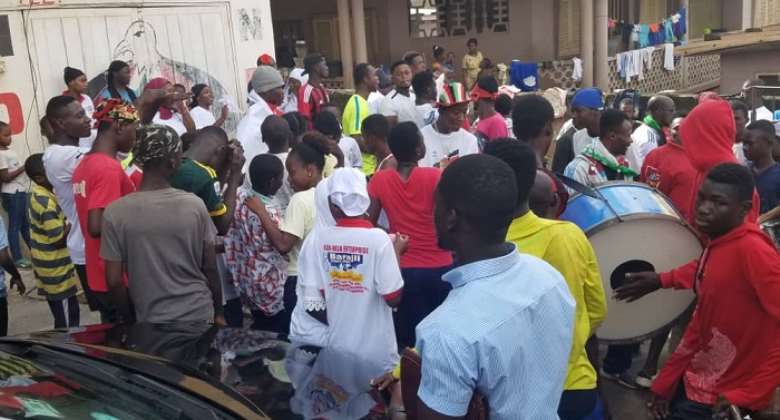 Some of the protesters

supporters of the opposition National Democratic Congress (NDC) in the Suame Constituency yesterday held a protest against the exclusion of a parliamentary candidate aspirant, Emmanuel Boahen from the party's primary election.

The aspirant was declared unfit to run for the NDC parliamentary slot by the party's vetting committee headed by Mr Alban Kingsford Sumani Bagbin because he is not a member in good standing in the constituency.

This has paved way for Francis Dodovi to run unopposed in the upcoming internal election.

But exclusion of Emmanuel Boahen has sparked a rare outcry with many of the constituency and branch executives, questioning the grounds of his disqualification and accusing regional executives of unfair treatment.

Sunday morning protesters gathered in front of the party's constituency office after authorities disqualified their favourite candidate from standing in the primaries, citing conspiracy scheme against Emmanuel Boahen.

The party's branch chairman for the Osei Kwadwo-B Electoral Area at Breman, Isaac Peprah, said they would keep demanding the regional executive to respect their rights to make a choice between Francis Dodovi and Emmanuel Boahen, whom he personally registered at the branch.

“He has a party card and pays his dues accordingly. I wonder why they are saying he is not eligible to stand for parliamentary candidate. He is a voter in this constituency. They can't disqualify him because of someone's interest,” he stated.

He wants the national executives of the party to intervene or they would advise themselves.

The protesters also petitioned the constituency chairman, Seeba Mohammed and called on him to forward it to the top echelon of the NDC for swift action on the issue.