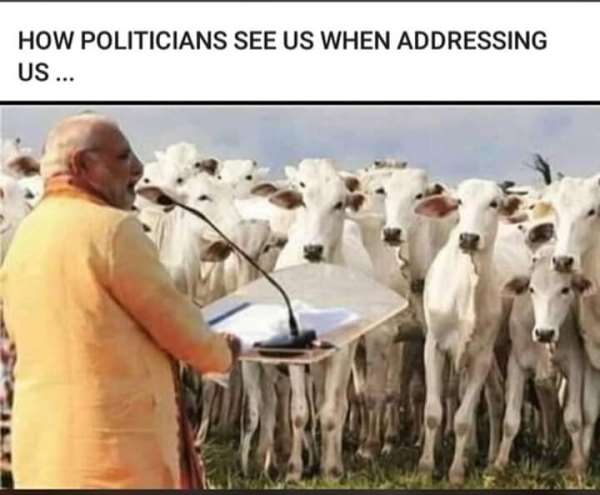 I have never seen Ghana more angered on an issue and also more united. Many of us were blindsided initially, at least I was! I had no idea what it was all about until the s**t hit the fan! Comprehensive Sexuality Education (CSE) all of a sudden was whoring everywhere becoming the butt, not of prurient jokes, but major social upheaval. All the Christian and Moslem denominations, teacher associations, morality and culture-based organizations, and ordinary people, spoke without equivocation: Send her packing, not in my backyard!

Oh dear, what then could have happened?
To find out, I could not help but let my mind backtrack to January 7 2017, the day Ghana became the laughing stock of the international community with an inaugural speech heavy with plagiarised stuff. That for me was the beginning of the drip, drip that today is engulfing us in a deluge of dysfunction and ineptitude.

Following closely at the heels of this plagiarism scandal was the issue of giving the US military some space in Ghana to establish a base. Some Ghanaians kicked against it vehemently even employing street demonstrations. But what did we see? Instead of Ghanaians being calmed with wise geopolitical explanations, we were met with a national address that was thick with hubris and arrogance, even going to the extent of accusing compatriots of purveying anti-American or America-hating sentiments!!! And the truth is that, Ghanaians love America (go see them lining up at the US Embassy for visas); only that, like America, they also put their country first. Talking about myself, I love American innovation, ingenuity, creativity and productivity. Where these are concerned they come out tops. And let us not forget the generosity of that country so if that “tough talking” national address was meant to be a sign of “strong leadership”, it lost out on carrying all of us along to why we must appreciate US friendship and cooperation…

I know, I have dwelt rather a little much on the preceding paragraph, but there is a reason: If you tabulate some of the highlights from January 7 2017, it follows that kind of pattern: Hubris and arrogance. Not in any chronological order, but check out the shameful and crassly partisan removal from office of one of Ghana’s most hardworking public servants, Mrs. Charlotte Osei, Chair of the Electoral Commission, to be replaced by an unabashed partisan operative; check out the refusal to prosecute political goons that attacked a court in the Ashanti Region to free their partners in crime; check Ayawaso West Wuogon; check the nugatory tampering with our national holidays; flowing from that check the continued attempt to rename our major public institutions of learning after family members; check out the so called national cathedral, one big ego trip parading as a pledge to God; check out the most unfriendly government-media landscape in recent history; check out the very recent Rutgers University disgrace of throwing out a Ghanaian from a town hall meeting whose only crime was that his line of questioning was not to the liking of the Ghanaian delegation to UNGA, Others like Kelni, PDS, etc., are such advanced acts of manipulation and exploitation of the commonwealth as to make us ordinary citizens dizzy… But check out the mother of all these acts of hubris and arrogance: The refusal to complete projects, especially the education related ones – classrooms, science labs, sports facilities, to give quality education – that were started by the Mahama era administration…

And now this: CSE! An education related caper that has sent all of us scampering about, but especially those who had cooked it and were ready to serve it. Now Nana Addo Dankwa Akufo-Addo says don’t blame me, Dr. Mathew Poku Prempeh says, I am not the one. So who is it? This is a simple case of “follow the money”! Funds were no doubt available for all those activities related to the programme. Where did those funds come from and who was the authorising authority? And when the chance came for them to carry as along with words of national cohesion, hubris and arrogance yet again took over and they tried to characterise it as just noise from a few people and blame it on John Mahama! On that, a former DG of the Ghana Education Service (GES) has boldly come out to challenge the Minister and his boss, his good upbringing making him fall short of calling them damn liars!

From the shabby handling of our Senior High Schools, to the current CSE caper, it is very clear that one of the most critical sectors of our development has been impaired with huge doses of hubris and arrogance and a generation or two, or even more, of Ghana’s current crop of senior high school leavers would be the most unprepared-for-anything in our history having been churned through a free but flawed system. Already, the fallen/falling standards of Ghanaian education remain a national crisis. Oh yes, who does not like free this or that, but free something without the full complement to achieve capacity, quality, efficiency and social purpose is as cynical as using sticking plaster to repair a complex bone fracture.

As we trundle uneasily towards the end of the first quarter of the 21st Century, what are we dealing with in Ghana? Certainly, neither enlightenment nor sophistication. If we did, a key minister of state, the Minister of Education, would not scoff at the concerns of school kids without proper toilet facilities; he would not be so flippant as to accuse a former President of bussing trouble makers to the Independence Square to cause confusion over a failed policy of the Minister himself; he would not be so duplicitous about CSE, which for once angered and united Ghanaians in saying NO with one voice…

And the last time I heard of him, he was still at post enjoying taxpayer largesse. After sweeping the fallout under the carpet with their unconvincing denials, he and his boss must be deceiving themselves into believing that they have succeeded in carrying us along…No, you have not!

Note
A word on the cover picture for today’s opinion. Some politicians do indeed give much credence to that unfortunate image. But I also know that this stereotype has exceptions, for I have had dealings with some politicians who are not that way…That is consoling, in these times of hubris and arrogance.