Macron calls on 'entire nation' to mobilse against terrorism 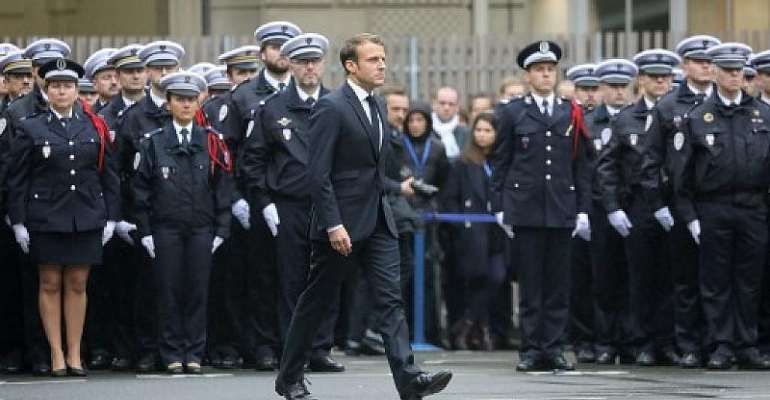 French President Emmanuel Macron called on the nation to fight terrorism on Tuesday at a ceremony in which four victims of last week's knife attack at Paris police headquarters were posthumously awarded France's highest civilian honour.

Macron led the ceremony at the police headquarters on Paris's main central island, the Ile de la Cité, where an IT specialist killed four colleagues before being shot dead last Thursday.

“We will wage an unrelenting fight in the face of Islamist terrorism,” Macron said in a speech in the presence of survivors, calling “the entire nation” to mobilise against the threat.

Macron was also to meet privately with families of the victims.

Also at the ceremony, Interior Minister Christophe Castaner bestowed France's highest civilian distinction, the Legion of Honour, to the three officers and one administrative worker who died in the attack.

Earlier in the morning, Castaner attended a closed-door hearing of a parliamentary committee to address how the suspect, who had a high level of security clearance, was not more closely monitored despite signs he had adopted radical religious beliefs.

The ceremony came as media reported the attacker possessed a USB device containing personal details of colleagues in the police HQ intelligence unit as well as propaganda videos of the Islamic State armed group (IS), though police have not officially confirmed the reports.

It also follows a warning from Paris that the IS, which has claimed responsibility for several deadly attacks in France since 2015, could regain strength if the United States follows through on plans to withdraw its troops from north-east Syria.