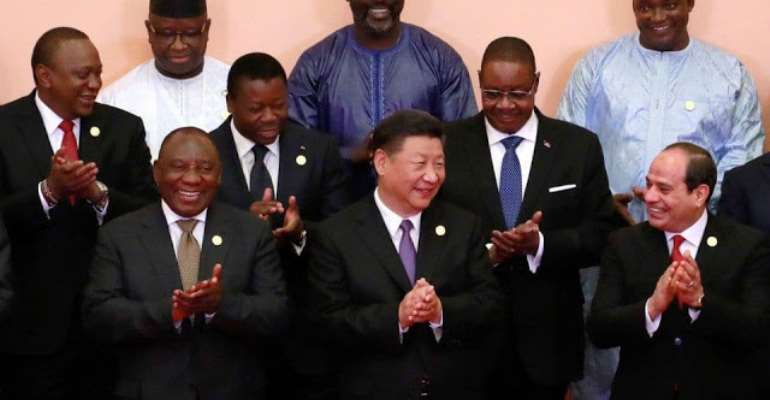 Poverty, despair, coups d'état, immigration, these are what usually, Europe and the United States of America generally speaking of Africa, a continent with immense problems, without solutions.

But the continent often referred to as the ‘Dark Continent,’ in terms of colour and also ‘Shithole Countries,’ by Donald Trump, is a place of opportunity for the same people disrespecting Africa.

It seems Africa doesn’t value what it has or simply can’t utilize its resources, thus; through political strategy, Africa always remains poor, while the parasites get richer, developed and secured.

You must, therefore, understood the great potential that China has discovered in Africa, after colonization. Thus, while on the one hand there is a destabilized and politically instability in Africa, China is rapidly making a fortune on the continent with its bait as a loan.

Last September, when 50 African heads of state were present in the great Peoples Hall in Beijing, Xi Jinping, the Chinese leader, announced $ 60 billion of investments in Africa among infrastructure projects, loans, and special funds.

A figure that is the crowning achievement of policy carried out for years and that has made Beijing a key factor for the future of the black continent. As Europe and America, China sees Africa as a fundamental outlet for economic prosperity.

Chinese projects in Africa, involved huge investments and no political interference in the internal affairs of the beneficiary countries, on the basis of the historical Chinese foreign policy line.

China has completely taken over Africa helping the development of East Africa too, in areas where Chinese companies are present in mass, amid infrastructure and modernization projects.

Imagine the railway from Djibouti to Ethiopia, according to sources, it could reach the west coast of Africa. China’s presence is also noticeable from Kenya to Tanzania and to Zimbabwe.

Recently, an important series of trade agreements with Nigeria and Burkina Faso were closed after the latter broke off its diplomatic relations with Taiwan.

The Confucius Institute, Beijing's historic vehicle for teaching Chinese and soft power, has even arrived in Senegal, on the west coast of Africa, promoting cultural exchanges between the continent and China.

It is, therefore, no coincidence that the number of young Africans studying in China is constantly increasing. Beijing has also present militarily in Africa, with its first permanent base abroad, stationed in Djibouti.

China's goal is the development of Africa, capable of emancipating itself from the historic western domination but the truth is China has captured and chained the continent with loans.

Is it necessary at all for Africa to liberate itself from colonial aggression to be in the hands of cunning China?

Well, you will be surprised to hear that despite the West and America antagonism relations with China, African leaders love them because the West underdeveloped the continent while China is developing it.