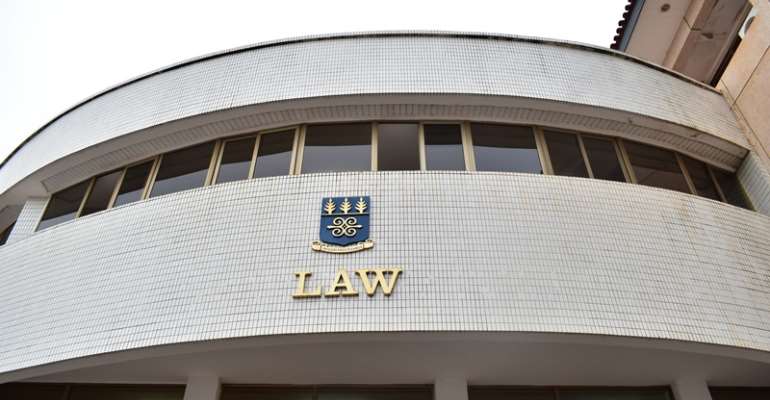 The gloomy grey skies after a downpour matched the mood of some of the students at the University of Ghana's Law Faculty the day I took a trip there. The country was still processing the news of the mass failure at the Ghana School of Law entrance exam; the latest in the now annual alarming incidences of mass failure at the school.

For all the angst that comes from the Ghana School of Law proper, the denizens of the law faculties nationwide would kill to be in a position where they were complaining about examinations in Ghana's only institution accredited for training lawyers in the professional course. At least they would be at the threshold of being called to the Bar.

The level 300 LLB students from the University of Ghana I spent some time with are wading in waters of uncertainty knowing in 2021, they will be at the mercy of a legal education system that many insist is broken.

It is no surprise most of them wanted to remain anonymous, just so the General Legal Council would not hunt them down after seeing some of their quotes on the record, they guessed. At least their anonymity made for a more candid interaction as I shuffled through my mental index for pseudonyms.

“Disbelief and hopelessness” were the first sentiments thrown my way by Don. “I thought the story was a joke,” he admitted. “I mean, to take 128 out of 1,800, it looks like a joke.” He was baffled by the fact that first-class students, Valedictorians even, were chewed and spat out by the entrance exam.

“If those people don't make it, you can imagine how the just above-average students feel,” he remarked. “If you are an institution and you set an exam and 7 percent pass then you should be looking at yourself. Not the students.”

Sitting across from Don, Tony revealed that their class had been worried enough to organise a meeting on the matter. The results sent shivers down their spines. But more than the fear, they felt a growing cynicism towards the General Legal Council, which oversees legal education in Ghana.

For them, the mass failure at the entrance exam pointed to one thing – the need to control numbers. If there was space for 100 percent intake, like the old days, there probably wouldn't be an entrance exam, some have argued.

This cynicism hasn't been helped by the posturing of Chief Justice Sophia Akuffo, who also chairs the General Legal Council. She laid the marker down during her vetting in 2017 and has long insisted that the failures are mere casualties of strict quality control.

Her comments in July 2019 seemed to have caused the most disquiet among students:

“For those of you lawyers and those of you lecturers who are busy advocating free scale mass admissions into the professional law course and[advocating for] mass production of lawyers, be careful what you wish for. So long as I have anything to do with it, it won't happen. Just like you can't mass produce doctors and surgeons, Ghanaians must not have mass-produced lawyers imposed on them.”

A couple of weeks after the mass failure at the entrance exam, she reiterated her stance at the passing out ceremony of new lawyers in Accra on October 4, where she insisted that quality was the General Legal Council’s priority.

The students feel they are up to standard but concede that the hard work they put in will come to nought because the General Legal Council is just “toying with people's destiny” in service of adhering to an unspoken quota.

Like most batches before it, the LLB class of 2021's journey started with an entrance exam and an interview. Just over 60 of them emerged triumphant out of hundreds of applicants. Two decades ago there was only one law faculty and that would have been enough to guarantee entry into the Ghana School of Law.

However, the competition has increased dramatically since then and there are now 14 faculties with students fighting for places at a single accredited school for taking the professional course although it has two satellite campuses.

The course work hasn't gone on hibernation either. It is as intense as ever. A former Dean of a Law Faculty once remarked that even eight hours of study a day will not cut it in the faculty. Don notes that the average graduate exceeds that figure in a bid to master the 15 courses they are presented with.

“In Contract Law, for example, we have over 250 cases that you must remember, and remember the principles. In Tort [Law], we have over 500 cases.”

So for them, the idea that the law faculties lacked quality is a non-starter and they even consider it an insult to suggest so. Some commentators have gone as far as positing that current students are failing because they engage in too much “computer language”.

To shift things to another track, one would ask: If the Council was so confident students were failing to meet the standards set, why shy away from challenges to the results and remarking by mandating students to sign away that right?

This is the most important question for Zain. The same examiners have been proven to be flawed at times given the successful remarking appeals after regular School of Law examinations.

“At that stage there is an opportunity for remarking to the extent that sometimes you hear that a lot of students in the School of Law have failed their exams but then when they go for remarking, they sometimes pass the exams.”

This obviously means there isn't a foolproof procedure for this entrance exam and “if people are given the opportunity for remarking, you may see more people passing.”

The lack of transparency in the process is what also vexes some observers who expect more from an institution tethered to the judiciary. Students have no idea of the marking scheme and there is no examiners report to buttress the results and this is what Zain described as “the biggest problem.”

For him, the comparisons and cries over a grand conspiracy to keep the law school numbers down may actually have some merit. Maybe 93 percent of the students who sat the entrance exam did fail genuinely. But only an independent probe could bring trusted closure, Zain said.

“We want to have an understanding of what went wrong [in the entrance exam] other than that, we will be engaging ourselves in speculation.”

Regardless of the levels of insight, the students all agreed that an overhaul was needed. “We can't leave it as an untouchable system,” said Zain.

Whilst there isn't a full forced resistance to the General Legal Council, there are spurts of protests here and there, like the one on October 7 sparked directly by the mass failure at the entrance exam.

“Now it seems like the diplomacy has not helped us but we still want to go through the right channels to go for a peaceful demonstration and we are just hoping that the authorities will listen this time around because we don't want to act illegally,” Don said.

Protesting may be all they have at this point because any attempt at legal action will be as futile as previous attempts to force change because the Chief Justice is an immovable force at the pressure points in legal education.

The idea of a challenge at the Supreme Court was parsed by Don but Tony quickly pointed out the inherent flaw in such an approach. “That is where the problem is. The head of the GLC [General Legal Council] is her Ladyship the Chief Justice.”

Following the October 7 #OpenUpLegalEducation protest , which saw police arresting some of the protesters and complaints of police brutality, the resistance could snowball into something monumental or just fizzle out like other recent student-based protests we have seen from teacher training colleges and nursing schools.

It is worth noting that the noise created by protests seems to amplify exponentially the closer we get to a general election and this is not lost on the law students.

The issue of the restoration of nursing trainee allowances was a hot topic ahead of the 2016 election with would-be winners promising to restore it and Don declares that if the law students “are pushed to the wall, we shall make it [legal education] an election issue.”

As has been argued before, politicians ignore the placards and raised fists but cower to the power of a thumb in an election year.

The grievances of the exclusive group of students in Ghana's legal education system are unlikely to draw sympathy from voters. But they should. Like nurses and doctors, there is also a deficit of lawyers in Ghana.

It is why Zain also insists that the agitations and calls for reforms should be viewed through the lens of social justice.

They ultimately want all Ghanaians to have more of a stake in their struggle against the General Legal Council because the ripple effects contribute to juveniles being remanded for five years and the poor being denied access to quality legal representation.

“The guy in prison who doesn't have a lawyer defending him because there are not enough lawyers cares about this particular issue. The ordinary Ghanaian cares about it.”

Maybe, like the Information Minister intimated, a compromise is what is required. But unless that compromise includes transparency from the General Legal Council, the angst within legal educations is bound to continue.