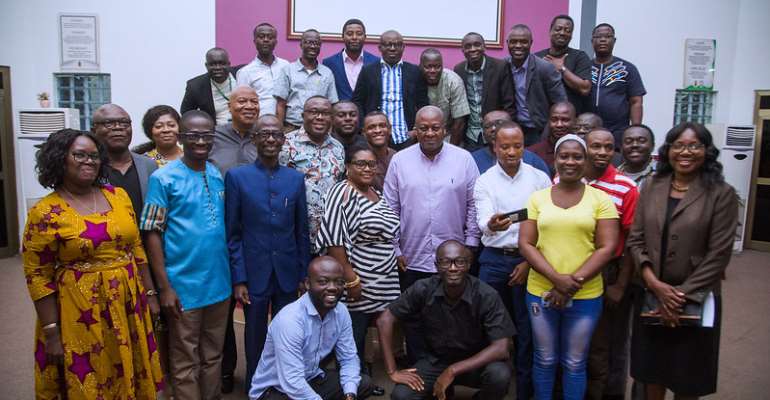 The leadership of the opposition National Democratic Congress (NDC) and their flagbearer John Dramani Mahama have met with the national executives of the University Teachers Association of Ghana (UTAG) in Kumasi.

The meeting was part of the NDC and John Dramani Mahama's engagement with stakeholders ahead of the 2020 general elections.

Speaking at the meeting, the former President noted that his party will continue to promote greater academic freedom in the universities, promising that developments on the campuses of the University of Education, Winneba, and the Kwame Nkrumah University of Science and Technology (KNUST) will never occur under his administration.

He has, therefore, cautioned government against actions that are affecting cordial engagements among lecturers and also management members which he said is ultimately affecting teaching and learning.

Mr. Mahama restated the NDC's opposition to the Public Universities Bill, affirming that each and every university must remain autonomous and conduct their affairs without the intended interference in their activities.

“Every university based on its diversity and what its objectives are must have its separate Act… if there are issues with the Act [that established a university], we can amend the Act for that particular university,” he stated.

The Kumasi meeting discussed many topical issues including remuneration, steps towards the introduction of sustainable grants for research and graduate education, the management of utilities on campus, the infrastructure deficit in the universities and the role universities can play in managing the unemployment challenge facing Ghana and other African countries.

The discussions form part of the NDC and John Mahama's engagement with stakeholders and key groupings ahead of the 2020 general elections.

According to President Mahama, the interactions are aimed at sharing ideas, listening to the concerns and expectations of the various groupings to shape the party's manifesto for 2020.