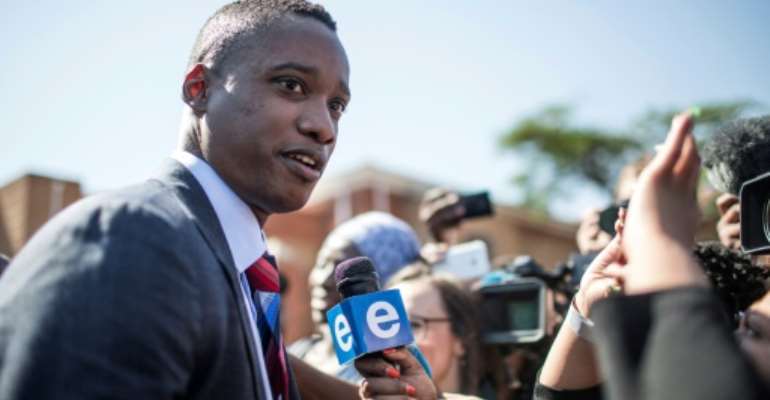 Duduzane Zuma, pictured last year, has testified before a judicial inquiry probing allegations that his father organised a systematic plunder of government coffers in a scandal known as "state capture". By GULSHAN KHAN (AFP)

The son of South Africa's former president Jacob Zuma on Monday denied allegations by the former deputy finance minister that he was offered a $40-million bribe.

Duduzane Zuma, 35, was testifying before a judicial inquiry probing allegations that his father organised a systematic plunder of government coffers in a scandal known as "state capture".

He has been named by various witnesses that have appeared before the inquiry, including former ministers, as having been a conduit for the Guptas, a wealthy migrant business family that allegedly had a corrupt relationship with his father.

Mcebisi Jonas, former deputy finance minister, said he was offered a $40-million bribe by one of the Gupta brothers Ajay, at a meeting arranged by Duduzane Zuma.

The bribe was for a promotion to the position of full minister in exchange for business favours.

Jonas said Ajay threatened to kill him when he turned down the money.

But Zuma on Monday denied any offer was made, claiming that while the "meeting happened" the "Guptas were not present".

"No offers were made," Zuma told the inquiry chaired by deputy chief justice Raymond Zondo.

Zuma's father, Jacob, testified at the same inquiry in July but withdrew on grounds that he had been "treated as someone who was accused" according to his lawyers. But he later agreed to return at a future date.

Jonas, who was deputy finance minister between 2014 and 2016, said Ajay warned him never to speak about the meeting.

"They would kill me," he told Zondo, adding that he was "very shaken" after the meeting.

But Zuma rejected Jonas' version, saying that "when we all emerged from that room, it was all cool."

The younger man said his accusers could not point to what he did wrong.

"I find it interesting that I'm always placed at these meetings but I never say anything.... And I'm always a couch or lamp shade that never says anything," Zuma said.

His elder brother Edward and his twin sister Duduzile were both present to show support for their sibling.

Jacob Zuma, South Africa's ex-president, was forced to resign early last year over graft scandals centred around the Gupta's, who won lucrative contracts with state companies and were allegedly even able to choose cabinet ministers.

Zuma's successor President Cyril Ramaphosa has vowed to tackle corruption in South Africa, which has been led by the ANC party since Nelson Mandela came to power in 1994 after the end of apartheid rule.