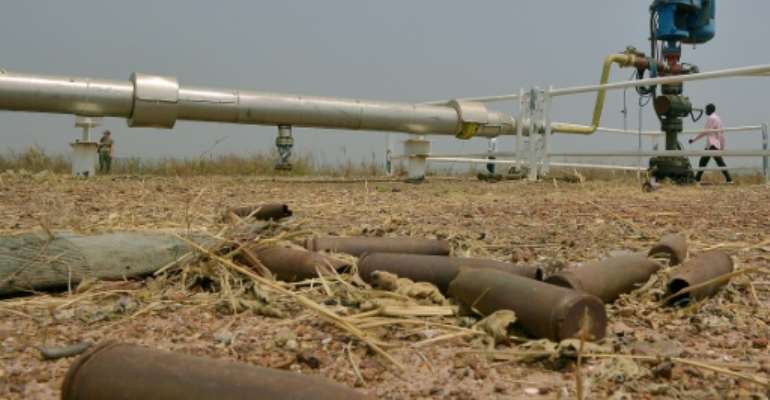 The money was paid back by deducting $15 from each barrel of oil from South Sudan -- which is processed in Sudan's refineries. By Tony KARUMBA (AFP/File)

South Sudan said Monday it was renegotiating an oil deal with Khartoum, as it will not meet a December deadline to finish paying $3 billion (2.7 billion euros) agreed as compensation for the oil-rich nation's 2011 secession.

South Sudan and Sudan in 2012 signed a deal in which Juba would pay the amount after it voted for independence, taking with it 70 percent of the oil fields Khartoum used to manage.

Petroleum Minister Awou Daniel Chuang told journalists that the cash-strapped nation had paid $2.4 billion so far, but would not manage to pay the remaining $600 million by December.

"As the contract expires we should be able to extend (the deadline) because we cannot run operations in a vacuum. This agreement is what governs the fees that we pay to Sudan," he said.

He said talks on extending the deadline would start by the end of October, adding that a team from Juba was already in Khartoum working on the issue.

Chuang said the money was paid back by deducting $15 from each barrel of oil from South Sudan -- which is processed in Sudan's refineries.

However years of fighting crippled oil production and payments fell behind.

Multiple attempts at peace have failed but in September 2018 the warring parties signed an agreement to form a unity government, which would see Machar return to government as vice president.

However the formation of a unity government has been dogged by delays, and the new deadline for its formation is November 12.