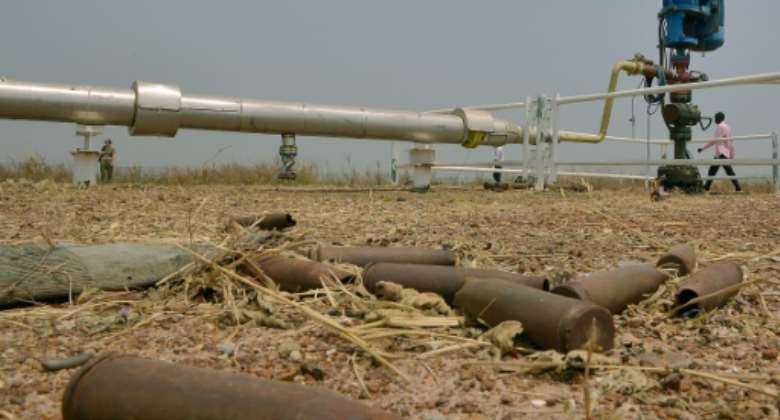 Although South Sudan's petroleum ministry said a 2,000-barrel leak had been contained local officials said a river used by residents of three counties had been heavily polluted. By Tony KARUMBA (AFP/File)

South Sudan's petroleum ministry warned Monday of more oil spills from poorly maintained facilities, after a pipeline leaked 2,000 barrels of oil in the north of the country.

Activists have long warned of the consequences to residents and the environment from oil spills in the area, where facilities have been battered by war and some lay dormant for years until a peace deal was signed in 2018.

Petroleum Minister Awou Daniel Chuang told journalists that 2,000 barrels of oil had leaked two weeks ago from a pipeline in the Unity Oil Fields, managed by a consortium of Chinese, Malaysian, Indian and local oil companies.

He said the leak had been contained and "what is left for us now to clean is the soil in that area."

"Of course we know that the production has been down for the last five years and the pipeline was empty and probably was filled with water (that) can expedite the process of corrosion within the pipeline," said Chuang.

"That is why we will all suspect that ruptures will happen from time to time..." he added.

The area in question is remote and the extent of the spill difficult to verify.

While the minister mentioned only an area of 400 square metres was impacted, local officials told AFP a river used by residents of three counties has been heavily polluted.

"It affected all three counties of greater Rubkona that is Gwit East Rubkona, Budang County, and Bentiu and the oil has polluted the main river," said regional lawmaker Gabriel Tap.

Gatiek Both, the commissioner of Budang county, confirmed steps have been taken to control the leak leakage but said the impact was devastating.

"This spill is badly affecting the area. Trees and the grass are dying and fish and some animals because it is rainy here, the water washes the oil into water sources where there are fish and animals."

South Sudan has been wracked by conflict since 2013 due to political rivalry among the ruling elite, and fighting devastated the oil sector -- its main earner.

Concerns have mounted over the health impact of the oil fields to surrounding communities, after decades of companies flouting environmental regulations in the war-torn nation.

A 2014 study by Cordaid reported that: "Oil production pollutants are suspected by communities to have caused many new health problems, such as increased infertility in women, a higher number of miscarriages, and eye and skin problems."

German NGO Sign of Hope, which has investigated the impact of oil pollution in the country, estimates as many as 600,000 people may be affected.

Chuang said government was busy investigating the effects of oil pollution in the area.