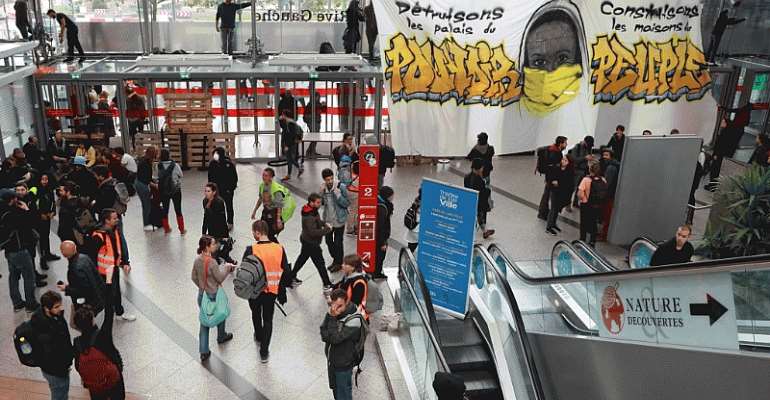 Climate protesters across the world have kicked off two weeks of global protests demanding immediate action to save the Earth from "extinction". In France,however, the movement has been criticised by former presidential candidate, environment minister and current ambassador for  North and South Poles, Ségolène Royal.

Marching with angry slogans or sitting down in the road and even chaining themselves to vehicles, crowds defied police in a wave of demos in major cities, also including Berlin and Amsterdam.

The Extinction Rebellion group is the motor behind the global movement demanding governments cut the carbon emissions.

They are backed by Greta Thunberg, the Swedish teenager whose searing address to the United Nations in September made international headlines and by academics studying climate change.

“There's a growing list of capitals and major cities where people are forming, large, on-the-streets- protest,” Extinction Rebellion spokesperson Clare Farell told RFI, stressing that they will be “non-violent,” but “disruptive.”

Ségolène Royal: ecology is peace!
But in France, the movement was criticised by  Ségolène Royal, who said in an interview with radio station France Inter that actions involving “civil disobedience” could quickly lead to “violent groups” which perform their acts in name of environmental protests, and which should be quelled rapidly, because they give a bad name to the image of ecology.

Ecology is peace,” she said, aparently oblivious of the fact that the Extinction Rebellion's French home page opens with the words "non-violence" written in capitals.

Paris got an early test with Extinction Rebellion activists occupying the Centre Commercial Italie 2 at Place d'Italie for several days before dispersing without incidents on Sunday, the day before the global action would start.

Social justice
Extinction Rebellion maintains it is non-violent. The movement was founded one year ago in England by eco-activists Roger Hallam, Simon Bramwell and Gail Bradbrook.

“Founding members of Extinction Rebellion did research into social sciences, into previous protest movements more than being inspired by the Green movement,” says Farell, the group's spokesperson, getting inspiration from “massive campaigns for social justice of the past that have made big wins,” citing the civil rights movement in the US, or Ghandi's Indian People's liberation movement. “Things that used non-violent protest methods to secure at the time unspeakably big wins in social justice.”

Massive system change
Addressing individual behavior and shaming people if they have a car or use a non-recyclable plastic bag does not work for Extinction Rebellion, says Farell.

“Going out on marches sometimes has the effect of making people feel that they've done something, have a sense of community and then they go home and nothing changes. Marching alone doesn't serve to get change to happen.

“But we also have to be careful in pointing the finger and say you're not doing the right thing because you have a car, so therefore we are going to call you a hypocrite.

“What we try to say is that every single person in our society is complicit in a system which is going to destroy the means for life on earth and that means that it is all of our fault and all of our problem, and we must come together and deal with it together, but mustn't blame and shame each other. We need to find unity and look at the systemic issues that are in front of us. We need a massive system change to deal with this problem," she says.