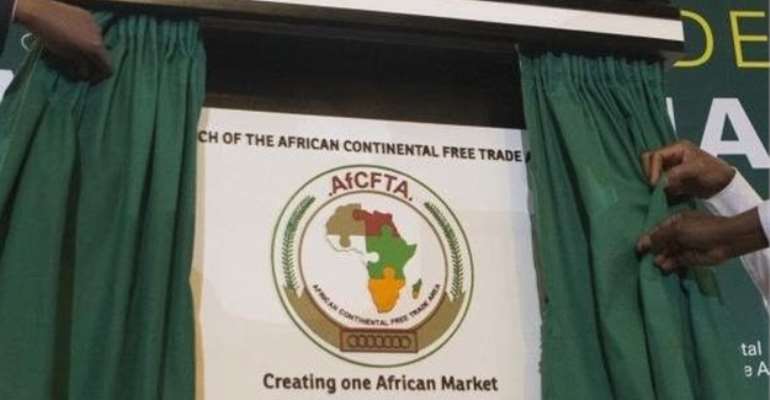 The critical role of the media in the implementation of the African Continental Free Trade Area (AfCFTA) underlined an intense two-day workshop organised by the Economic Commission for Africa - ECA on 2-3 October in Johannesburg, South Africa.

The AfCFTA is set to create one of the world's largest single markets, accounting for over $4 trillion in spending and investment across the continent and the media is a crucial stakeholder in creating a conducive public discourse on this agreement, which can support making its potential a reality.

Adeyinka Adeyemi, Senior Programme Management Officer, ECA who presented an overview of the AfCFTA to participants at the workshop said, “The media creates and shapes public opinion by, translating complex technical issues like the AfCFTA into stories accessible to the public. This means that the media has an important responsibility to unpack Africa’s Free Trade Story and actively engage the public on the integration agenda and we, as the ECA, need to support them with our technical data and insights.”

The media often face the most testing challenge in informing the public and bringing their views into a wider debate of African regional integration.

Beyond the agreement itself the workshop, dubbed AfCFTA media hub, led by Prof Nixon Kariithi of Tangaza Africa Media, also highlighted the opportunities for youth on the AfCFTA, outlining the issues that young people are preoccupied with, such as job creation, agriculture, filling the infrastructure gap and the digital economy. A major take-away from the session led by the Youth Alliance for Leadership and Development in Africa (YALDA) emphasised how important the role of youth is for the implementation of the AfCFTA since this will be the generation that will operationalise the agreement in the years to come. The workshop also discussed:

·The role of business and economics journalism in society

·Understanding the African economy
·Reporting trade and other economic indicators

“Implementing the AfCFTA will have very tangible impacts on the daily lives of a population expected to grow from 1.3 billion in 2020 to 2.75 billion by 2060”, says Mercy Wambui, ECA’s chief communications officer. “It will require a proactive and inclusive process to keep all stakeholders informed and engaged at the local, national, regional and international level to make sure the free trade area really delivers for all Africans. This is where the African media have a strategic role to play – not as mouth pieces but as actors on the development landscape”.

The AfCFTA provides the opportunity for Africa to create the world's largest free trade area, with the potential to unite 1.3 billion people, in a $2.5 trillion economic bloc and usher in a new era of development. Moreover, the African media can help the public better understand the opportunities as well as the challenges involved in the implementation of the AfCFTA. The press can make trade reporting more humanised by integrating trade themes into other major news stories and developing new frames for telling trade stories to unpack Africa's Free Trade Story. This helps a variety of stakeholders better understand how the AfCFTA can practically grow intra-African trade, enhance competitiveness and ensure a better reallocation of resources in a way that practically impacts their own lives.

This workshop is part of a more extensive project aimed at deepening Africa's trade integration through effective implementation of the AfCFTA. Financially supported by the European Union, ECA has been working with its partners including the African Union Commission (AUC), International Trade Centre (ITC), United Nations Conference on Trade and Development (UNCTAD) and a selection of independent trade experts to ensure effective AfCFTA implementation strategies.